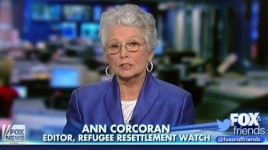 Prior to 2007 I had no interest in the refugee issue, heck, I had no idea there even was any controversy.

Of course I knew there were refugees moving around the world, but I had no clue that the US government was actively working with the United Nations to select refugees from third world countries and then was quietly placing them in small and medium-sized cities in most of the fifty states.

That is, until a stir was created in the rural county where I live in Western Maryland.

To make a very long story short, I learned that the Virginia Council of Churches , working for New York City-based Church World Service, had been quietly placing refugees in our county.

I wanted to know if the people of Washington County had any say in the matter, and who told a Virginia church group that they could place an economic burden on a county that had a lot of burdens already.

Our local paper, the Herald Mail, had no interest in explaining to our citizens how the program, which I had just learned was the US State Department’s US Refugee Admissions Program, worked.  I implored the paper to investigate and report facts to help tamp down a growing anger as more people had questions about how the decision was made and who would pay for the needs of the impoverished refugees.

Click here for a post I wrote in 2007 explaining how I asked the Herald Mail to publish a thorough report on the refugee program.  I think you will see that the questions I asked were reasonable and ones any sensible person would ask.

Ultimately a public meeting was held, Hagerstown city and Washington County citizens were not happy, and within weeks the US State Department sent the Virginia Council of Churches back to Virginia.

All of that history (and subsequent mentions of those early days) is cataloged in a category I called ‘September Forum’ for anyone who is interested in the history.

I launched Refugee Resettlement Watch in July 2007 simply as a place to archive everything I was learning (after the Herald Mail refused to inform citizens) about a subject that had so intrigued me.

If you are new to RRW, you need to know that I don’t work for anyone!  And, I am not paid for my volunteer work!

I’m just a citizen who believes that taxpaying Americans have every right to know how a government program works and so have spent the last 12 years (writing almost every day!) on this one very dysfunctional and frankly destructive program.

By the way, I didn’t start out thinking the program itself was dangerous for the future of our country, I was initially only concerned with how dysfunctional and unfair it is.

Unfair because local people had no say in how their community was being changed by bureaucrats in Washington!

I have nearly 9,000 posts archived here in which I explain the program, educate about what is happening around the US, and report on refugee problems around the world.

Then in late 2018, I became discouraged.

After the President had been in office for nearly two years, I didn’t see the major reforms being initiated that I had hoped for.  Yes, he drastically cut the numbers of refugees arriving, but he left the structure of the program firmly in place.

And, he signaled that no major changes would be made by continuing to fund all nine federal refugee contractors (like the arrogant and politically Progressive Church World Service responsible for refugee placement in my county) even as they had many fewer refugees to ‘care for.’

I posited, and still do, that if no major reform of the program is made during Trump’s tenure in the White House, the program will be put on steroids as soon as he is gone.

Indeed, the refugee industry will demand of the new President that the numbers being admitted should be increased tenfold to make up for what they will call the “lost Trump years.”

Last fall, I figured it was time for me to do something else, so at the first of the year, I launched a new blog—Frauds, Crooks and Criminals—in order to write about a broader range of issues that appealed to me.

If I was going to write every day, I figured I might as well have fun!

Although relatively inactive, Refugee Resettlement Watch was still available for citizens seeking an education about the refugee program, or so I thought!

In June the blow came—a reader reported that RRW had been taken down!

I had no warning from my host of more than a decade— WordPress.com—which was destroying years of my work, and when I inquired they refused to tell me why now, after nearly 12 years of using their services I was being kicked off of their platform.

This is censorship, plain and simple. I wrote about it here at ‘Frauds and Crooks.’

It was obvious that the speech police had finally found me as the Leftists and Open Borders Agitators (in the run-up to the 2020 elections) go about silencing anyone with views other than theirs—anyone who isn’t supportive of their mission of changing America by changing the people.

WordPress.com allowed me access to my posts in order to host my own blog, but I was not provided access to my subscribers or sadly not to most of my photos, graphs and charts that illustrated my posts.

I needed help!  What did I know about taking a hodge-podge of nearly 9,000 posts and putting them all back into some usable format?

However, thanks to help from Elbel Consulting Services, LLC, I rebuilt the blog and am hosting it on a secure server. I’m back!

Thanks for being here with me!

See my ‘Welcome Back’ post when I relaunched RRW on September 2, 2019.