And, she has been brave enough to write a book about it.  The book is “an eye-opening indictment of the deep-seated misogyny in patriarchal cultures.”

What! I thought diversity was beautiful and that adding more Somalis to America was going to strengthen us!   Is she saying there are secrets about which the Open Borders cabal isn’t telling us as they push for more and more refugee resettlement for East Africans?

A press release from Benzinga:

CHANDLER, Ariz., July 31, 2020 /PRNewswire-PRWeb/ — Malyun Ali, also known as Mama Malyun Suuban (MMS), currently resides in Phoenix, Arizona, as homeless person. Previously lived in Minneapolis, Minnesota, and moved away from there due to threats and cyberbullying by the Somali community.

The attack started due to the fact that she decided to speak up for the rights of the women of Somali, both abroad and back in Somalia.

Malyun Ali is a mother of three adult children and one grandchild. She is the voice of the voiceless and have challenged a culture that sees their women as second-class citizens. She is a businesswoman, a visionary, trailblazer and has a heart of gold. She has helped countless of victims throughout the years.

She is a YouTuber and is the first person of Somali descended [sic] to come out public as a child sexual-abuse survivor.

She has published his new book “I Cannot Be Silenced”: a deeply personal memoir of the horrific abuse she endured as a child and young woman in her native Somalia, and an eye-opening indictment of the deep-seated misogyny in patriarchal cultures.

She writes, “What you will read about in these pages has not just been my experiences but those of many women who are afraid to share their shameful secrets. My message is twofold: (1) to encourage women to shed this cloak of shame they have been forced to wear by both men and women who believe it is their right and privilege to steal their spirits; and (2) to inform and educate people of the Western world who can join with us in our fight for freedom.

“Others cannot feel your passion for change if they are ignorant of your lifetime of pain. There is no such thing as a silent cause. I promise you, speaking out will heal your soul, and that is what this book will show you how I have done it.

“This book will offer a platform for Western women/men to hear about and learn how to help female immigrants to better assimilate and adjust to new environments and communities as well. This book will be a guide to many service provider and individuals who are working with Somali community to understand them in a true, authentic, transparent, and honest way of working with this community victims and individuals who are not able to speak up and seek support.”

I guess this means all those resettlement contractors paid to resettle refugees better get to work and help these poor women instead of constantly agitating the rest of us about racism! These are black lives that matter, right?

And, by the way, these women are going to need the police and the US Justice system if they want to break the cycle of violence.  Does anyone believe that a little chit-chat with a social worker is going to do any good?

By the way, if you missed it at ‘Frauds and Crooks’ see:

Fugitive from Justice Charged with Kidnapping Likely in Somalia

Granted that I just this morning advised readers that it was time to focus on keeping your family and your local patriot community prepared and safe for the sure-to-expand civil unrest leading up to and following the 2020 Presidential election and curtail some of your news-reading addiction, I can’t resist directing you to some reading about Europe.

First, see what I said at ‘Frauds and Crooks’ and then see this screenshot at Borderhawk’s Eye on Europe. 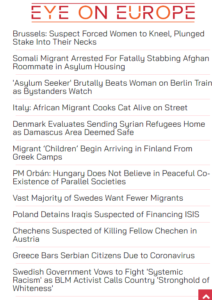 There is no one coming to save us from the same fate.  We don’t have a Viktor Orban!

Go to work with your family and local friends and plan for how you will first, survive, and then put any extra time you have into ousting politicians who are leading us to the brink.  We must resist becoming Europe if it isn’t already too late!

You learn something new every day.

Did you know that the center of the Armenian immigrant community in America is located in Glendale, California and that we are still bringing Armenian ‘refugees’ to the US to be placed mostly, where? in California, in and around Glendale where there are obviously ethnic and racial cultural clashes going on.

According to wikipedia, Glendale has the highest concentration of Armenians in the US.

Glendale, just a few miles away from Downtown Los Angeles, has a population of about 200,000, of which, according to some estimates, 40% is Armenian.

Thanks to reader ‘ganjagrandma’ for sending this story from the Atlanta Black Star.

It is several weeks old, but this news about racial and ethnic tensions at Glendale’s Hoover High sure didn’t make the national news.

So much for the mythical American melting pot!

Several students have been disciplined after shocking footage of what concerned parents called a racially-motivated melee between dozens of teens at a Glendale, California high school.

Students involved in last Wednesday’s brawl at Hoover High School were remanded to separate rooms Monday and spoke little during “restorative circle” sessions with school counselors, according to KTLA.

The fight reportedly erupted during lunch period Wednesday, starting as a dispute between two students and quickly growing to involve dozens. That’s when police arrived to restore order, as the fists continued to fly.

No serious injuries were reported.

Parents said their kids tell them there’s been mounting racial tension on campus between Armenian students, the largest ethnic group at the school, and members the football and baseball teams who are mostly Black and Latino, among other ethnicities.

Ah, the joys of diversity.

This isn’t supposed to be happening in welcoming Canada!
Aren’t we led to believe that poor and oppressed minority people feel for each other, that there couldn’t possibly be racism when neither side is white European?

“It’s further colonization,” Wirch said of refugee resettlement. “We [Indigenous people] are further being displaced from our lands, from our food, from our waters. And it’s wrong.”

END_OF_DOCUMENT_TOKEN_TO_BE_REPLACED

We’ve had so many good comments over the last few days, but this one at our facebook page jumped out at me.  It is in response to Michelle Malkin’s good article: “Horror and Hush-up in Twin Falls, Idaho.”


I couldn’t agree more with Gordon Millar about the idea of FORCED DIVERSITY, but he can explain it better than I can.
Mr. Millar:

This gets at the crux of the Lunacy. The elite demand Forced Diversity, a focused plan by a few. The civil servants are obliged to enforce it, They cover up any negativity that would inflame the masses. The Mainstream Media, who were programmed at Uni and are on-board with Multiculturalism, suppress news that exposes the weakness of the Multicultural Ideology, and they promote a narrative that is favourable to it.

The Left cannot re-evaluate their Faith in Multiculturalism, they sense it will not work but they can’t dare look. No, they are forced by pride and cowardice, to close their minds to reason and re-double their efforts to make the dream they believe in, a reality. (Magical Thinking)

We must do our homework and be ready to stand when the opportunity presents itself.

And we will!
See all of our guest posts and comments worth noting, here.