She had gone to his home to collect her belongings after breaking up with him.  Sick story at the UK Daily Mail (hat tip: Paul):

Swedish girl, 17, was decapitated ‘by Iraqi-born boyfriend, 23, who wrapped her head in aluminium foil’ after she broke up with him in case that has shocked the country

A 17-year-old girl was beheaded by her ex-boyfriend after breaking up with him in Sweden, it is alleged.

Wilma Andersson vanished on November 14 last year and police found a ‘body part’ two weeks later – which was later revealed to be her head.

Her ex-boyfriend Tishko Ahmed Shabaz was arrested at the time and has now been charged with her murder, which he denies.

Shabaz is accused of decapitating Wilma when she went to collect her belongings before wrapping her head in foil and hiding it at his home.

Read on if you can stomach it.

My Sweden file is here.  I’ve long predicted it will be the first European country to be completely annihilated by its own stupidity regarding immigration.

Find my Invasion of Europe archive by clicking here. 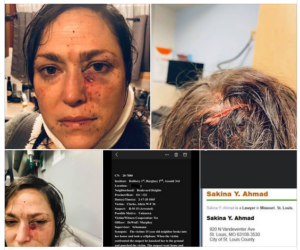 But, Texas isn’t sending him back to Colorado immediately because they are investigating potential other crimes he may have committed in Texas.

This reminds me of something a friend said yesterday.

Going forward, any governor or county commission that tells the President—send us more refugees—will ‘own it’ when a refugee takes an American’s job, costs us for consuming social services Americans need, or commits a violent crime in their jurisdictions.

The consenting elected official will not be able to blame Washington, but it will be on them and I’ll be right here to point out that connection going forward.

HOUSTON — A man suspected of killing a woman in the Denver suburb of Sheridan has been arrested in Houston.

According to law enforcement sources, Abbas Abdal Kathem Abed was found at a Houston homeless shelter. Sheridan police worked alongside Houston police and the U.S. Marshals Service to find Abed. 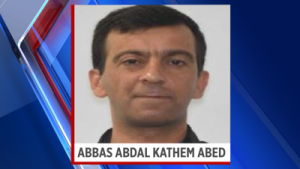 Abed’s minivan had been located in the Houston area a few weeks ago, but law enforcement sources say Abed was arrested Thursday shortly after they received a tip from the shelter.

Abed had been employed as an Uber driver. Following Snider’s death, Uber said Abed no longer has access to the app. Uber does not believe their ridesharing app had anything to do with the crime because the platform was turned off at the time of the incident.

Abed is an Iraqi refugee. Investigators believe he may have gone to Houston because of Iraqi friends he met there when he first came to the U.S.  [Begs the question—what sort of people are his Iraqi friends?—ed]

A law enforcement source says Abed’s extradition to Colorado could be delayed because Houston police are investigating crimes he may have committed there, including attempted murder.

Every time there is a violent crime or attempted terrorist attack by a ‘VETTED’ refugee (vetting is a joke of course!), we should be told which of the nine federal contractors were responsible for placing that criminal in an unsuspecting community.  There ought to be a law!

I can’t pin this alleged murderer on Texas Governor Abbott, but if he signs on for more refugees for Texas, I will be holding him responsible for future criminals arriving in the state and you should too!

A 28-year-old “man” has been arrested in a violent kidnapping case, luckily the woman fought back and escaped.

Ann Coulter once said that the way news stories are written about crime cases involving migrants and refugees one needs a “secret decoder ring” to figure out what nationality the alleged attacker is and what might be his or her immigration status.
Reader Linda sent me the story from Spokane and this morning I had a few minutes to search news stories about the arrest of Atif Ado.
END_OF_DOCUMENT_TOKEN_TO_BE_REPLACED
07/15/2017 ~ Ann Corcoran ~ Leave a comment

It was  only two days ago that I told you that “assimilation” is a dirty word in the lexicon of the Open Borders/Refugee industry.  I also told you that we have admitted over 40,000 ‘refugees’ from the DR Congo (so  far) with a UN agreed upon goal of taking 50,000.
(DR Congolese refugees are the largest ethnic group coming in under the Trump Administration. Only 3.8% are Muslim, if you are wondering.)


Now both posts serve as background for this stunner from Manchester, NH about a refugee from DR Congo who beat a woman (no mention if it was his wife) and was given a free pass by the legal system because he had come from a violent culture.
After reading the story here and here, I realized why the refugee advocates and officials have mentioned in the past that women from the DR Congo will need lots of (costly) mental health treatment.

Not just women and children!


And, we were led to believe that we were getting mostly women and children.  I just checked the demographic data at Wrapsnet and was shocked to learn that men and women are pretty much equal in number and in fact in the 21-30 age group in most years, men arriving here out-numbered the women in that group!
Here is a bit from the story at ImmigrationReform.com (hat tip: Joanne):

Assimilation is one of the most critical aspects of any successful immigration system. It determines whether an aspiring migrant will be able to adapt to a nation’s values, laws, and culture. And no, this type of assimilation doesn’t mean that one must throw away all of the cultural heritage that makes a person who they are. Rather, it means that they must reconcile their heritage with the laws and values of the nation they wish to join.

A breaking story in New Hampshire highlights the importance of this concept. According to court records obtained by the New Hampshire Union Leader, a prosecutor dropped domestic violence charges against Augustin Bahati, a Congolese refugee, when she unilaterally decided “that he lacked the cultural competency to participate in the American justice system.” In essence, this means that the prosecutor determined Bahati was still so rooted in his old culture – where domestic violence is presumably acceptable – that he was incapable of being legally responsible for violating American domestic abuse laws.

In the Democratic Republic of the Congo (DRC), where Bahati is originally from, sexual abuse and domestic violence are commonplace. In fact, The DRC is often referred to as “the rape capital of the world.” Throughout the 20-year, ongoing civil war within the republic’s borders, the Brooking’s Institution estimates that as many as 48 rapes occur every hour, largely stemming from members of rival militias. In addition, there are very few laws on the books aimed at protecting women from spousal abuse.

This decision is highly troubling, especially since Bahati’s alleged crimes include “striking, pushing, grabbing, kicking and pulling out the hair” of a woman who was 27 weeks pregnant, according to the Union Leader. What the Manchester prosecutor seems to be saying, is that Bahati’s domestic abuse should be tolerated, because he is new to the United States and still acting according to the moral and legal standards of his native country.

Does your state ‘welcome’ refugees from the DR Congo?

Most states do. Only HAWAII, Delaware, West Virginia and Wyoming have escaped!
Since this big resettlement began in earnest in FY2013, we went back to that year (up to the present day) at Wrapsnet.  40,216 are living in your towns and cities.  Only 9,784 to go to please the United Nations, but I have never seen one of these camp clean out projects end when they promised it would!

Here are the Top Ten states with the most DR Congolese refugees arriving since FY2013:

Thanks to all of you who have taken the time to tell the White House what you think!