This is too funny!  They are worried that they will not be able to whip up a public frenzy to demand more migration to American towns and cities once they have installed their man—Joe Biden—in the White House.

This is just one of many stories I’ve read in recent days in which the Socialist Dems worry that either Biden can’t possibly unwind all of the changes the Trump Administration made to our immigration system that slowed the invasion at the border, increased vetting for refugees, limited refugee numbers to help American low wage workers***, restricted the flow of migrants possibly carrying the Chinese virus, and saw the deportation of criminals who should not have been here.

And, they are in a pickle if the flow across the border picks up (it has already started). Images of border wall crashers will be a public relations nightmare for the Biden team. The vast majority of Americans do not want to see an invasion repeat.

If Biden can’t or won’t act quickly to reverse what Trump has done to limit immigration, how on earth are they going to whip up a public frenzy after they destroyed our election system to get their candidate installed in the White House?

Here is a story that had me rolling on the floor laughing….

Let me be clear this is about Leftwing Jews!  Just as there are Leftist Catholics and conservative Catholics, there are many conservative Jews who do strongly support the Trump Administration’s immigration restriction stance.

Jews rallied behind immigrants under Trump. Will they stop once Biden is president?

Alain Mentha, co-chair of the New Jersey Jewish Coalition for Refugees, watched with dismay last week as the board of Hudson County voted to extend a contract to hold Immigration and Customs Enforcement detainees at the local jail. The board consists entirely of Democrats, many of whom had pledged to stop working with ICE during the Trump presidency, and yet it approved the extension in a 6-3 vote.

Mentha’s frustration with the vote mirrors the concerns of some immigration advocates across the country who were heartened by Joe Biden’s victory in the presidential election, but fear it may not be enough to reverse Trump-era policies — especially if the public pressure over the issue dies down.

“I’m very worried, to be honest,” Mentha said in an interview. “I don’t want to be cynical or pessimistic, but I think it’s fair to wonder whether our elected officials are going to become complacent or suffer from inertia.”

Or, is it possible that even Democrat elected officials know that the general public will not tolerate loosening immigration policy!

The Trump administration took more than 400 executive actions over the last four years to break apart and reconstruct the nation’s immigration system, the Migration Policy Institute said in a recent report.

Liberal Jewish groups mobilized in opposition to these changes, which included the practice of separating children from their parents at the Mexican border, and the decision to make asylum-seekers wait in Mexico for their court hearings. Many advocates are optimistic that President-elect Biden will follow through on his campaign promises to reverse these policies, but they also fear that a Democratic administration may not face the same scrutiny that turned arcane border and refugee policy into frontpage news over the last four years.

What they are really saying is that they won’t have the orange monster to beat up (with the help of the media) and how on earth are they going to beat up Biden! 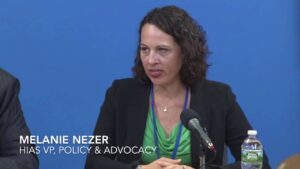 “There is that possibility that in January people feel like, ‘OK, everything is back to normal,’” said Melanie Nezer, a senior vice president at HIAS, the leading Jewish immigrant aid group. “We really have an opportunity here, but it won’t happen without intense pressure.”

Biden has pledged to resettle 125,000 refugees per year, more than in all but seven years since the program began in 1980 and well above average of 70,000 per year under President George W. Bush and 80,000 per year during the Obama administration. The ambitious goal would also be 10 times the 12,000 allowed to enter the United States during the past year.

He has also committed to end the current policy requiring asylum-seekers to await their hearings in Mexico; restore the program that allows undocumented immigrants who arrived in the country as children to receive legal residence; and prioritize the deportation of people who have committed crimes unrelated to their immigration status.

But Nezer said the immigration system has been so thoroughly altered by Trump and his senior adviser, Stephen Miller, that it will take years to repair.  [LOL! She is lowering expectations to protect Biden.–ed]

Mentha said he fears that Biden may not prioritize immigration policy early in his term, as the country continues to grapple with a public health and economic crisis that could make Americans skeptical of allowing in foreigners.

“I’m very concerned that the climate as a whole isn’t very receptive,” he said.

It’s certainly not all doom and gloom for those active in the Jewish immigration-rights world, most of whom are optimistic about the next four years. Several activists interviewed cited Biden’s nomination of Alejandro Mayorkas, who arrived in the United States as an infant, to serve as secretary of the Department of Homeland Security.

Mayorkas, who is on the board of HIAS, comes from a family of Cuban-Jewish refugees. He helped craft DACA while serving in the Obama administration and pledged after his nomination last week to protect “those who flee persecution in search of a better life for themselves and their loved ones.”

*** Here is one story from recent days about how difficult it is going to be to unwind Trump’s policies.

Refugees under the Obama Administration were coming in in vast numbers to supply low wage workers for big business and the service industry (you know maids and janitors).  But, the Chinese virus crisis has limited those jobs and here we see former Obama refugee honcho make that point:

“There are challenges that were not present during the Obama administration that are going to complicate or present obstacles to expanding the program,” Carey said. “And I think refugees generally enter entry-level jobs in the service industry, and that’s an area that’s been particularly hard hit in the economic downturn.”

So will Biden (if he makes it to the White House!) just bring in larger numbers than we have seen admitted for decades and simply put them all on welfare?

If you are new to RRW, you might want to learn more about the Hebrew Immigrant Aid Society. I have an extensive archive on the federal government contractor (taxpayers pay them millions for their ‘work’) that has probably worked the hardest of the nine federal refugee contractors to remove President Trump from the White House.