Because this story is so important, I’m posting it instead of a weekly round-up of refugee news.

And, besides, the US Refugee Admissions Program has been stalled for some mysterious reason by the Biden gang so there isn’t a lot new since last week.

I can only guess the hold-up is because they have created such a crisis at our wide open border with their fake refugee invasion that they aren’t beginning the large movement they promised the Left of Africans, Asians and Middle Easterners into the country fearing more anger from their 80 million voters! (Only 24% of all Americans support Biden border policies.)

That isn’t making the nine contractors***, who are paid by you and me to place them, happy.

However, two of the nine contractors are busy collecting millions to ostensibly take care of the women and kids, including some “not so nice women,” arriving at the border in historically high numbers.

Those two are the US Conference of Catholic Bishops and Lutheran Immigration and Refugee Service.

First, to get a feel for the magnitude of the crisis, see the New York Times story headlined:

The administration is under intensifying pressure to expand its capacity to care for as many as 35,000 unaccompanied minors, part of a wave of people crossing the border.

More than 20,000 children and teenagers are in the custody of a government system that is already at “103 percent of capacity,” including nearly 17,000 in shelters run by the health department, according to briefing materials from Operation Artemis, a response to the border crisis led by the Federal Emergency Management Agency.

Government projections obtained by The New York Times show there could be more than 35,000 migrant children to be cared for by June — a prospect that one former senior health and human services official called “terrifying.”

The NYT story does not mention the role Catholic agencies are playing, but does mention Lutheran Immigration and Refugee Service headquartered in Baltimore, Maryland.  Of course you are led to believe that they are doing their work of moving migrants to the interior US out of the goodness of their Christian hearts.

Now,, see the controversial film in front of a Catholic agency in McAllen, Texas from Infowars this week if you aren’t one of the million or so who have already seen it.

Catholic Charities Rio Grande Valley on Thursday said a viral video of their work with migrant children on the U.S.-Mexico border is “inaccurate and unauthorized.”

We have been doing our humanitarian work for years, said Pimental director of Catholic Charities Rio Grande Valley.

One of those on the scene for the confrontation in front of McAllen’s Catholic Charities facility is Tim Enlow and it is worth an hour of your time to see and hear him explain to patriot interviewer Delora O’Brien what exactly went down that day.

One of the most shocking revelations in the interview is that Enlow describes the arrival at the scene of a white man identifying himself as wealthy and from Philadelphia who claims he was told by a nun! that he could come down to McAllen and pick up a couple of van loads of single women he could care for and provide work for!

Watch it before Youtube removes it!  Hat tip: Robin.

O’Brien and Enlow charge that the government, our US government, is sponsoring child smuggling!

Your tax dollars at work!

They are more right than they know since both Lutheran Immigration and Refugee Service (LIRS) and the US Conference of Catholic Bishops (USCCB) are raking in millions from the US Treasury to ‘care for’ Unaccompanied Alien Children (UAC).

If you are a long-time reader of RRW, this news is not new!

I bet for others, you had no idea that YOUR TAX DOLLARS were paying these ‘religious’ charities for their work!

Data for the Bishops from USA Spending where all federal grants and contracts are catalogued.

Here we learn that the USCCB has pulled in $17.9 million in just the last 12 months for their UAC ‘care.’

The UACs represent the biggest chunk of the Bishops payola right now. 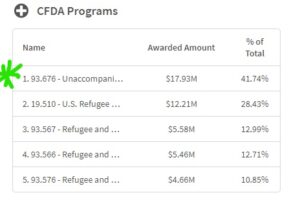 Below you can see a year-to-year comparison.

They have lost some serious money since Obama, but they are picking up steam again.  See for FY21, which we are in right now, they anticipate more millions this fiscal year as represented by the yellow line.

The Lutherans have got the Catholics beat!

LIRS doesn’t need to be bringing in refugees from around the world, they are doing very well taking care of the illegal alien children. The $55 million is their take (of your money) for the children! over the last twelve months.

By the way, LIRS is over 90% taxpayer funded. There is no passing the plate at Sunday services for them! 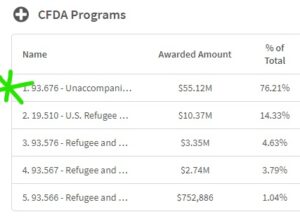 Longtime readers know that LIRS was mired in controversy a few years ago, but notice how much the Trump Administration was shelling out to them.  More than any Obama year!  Pity that Trump never put anyone into key positions who knew where the bodies were buried.