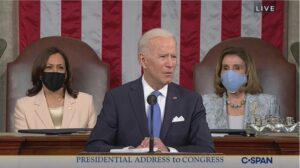 Oh he mentioned immigration—“our war over immigration,” he called it—-but the word “refugee” does not appear in the text of his simplistic speech seemingly geared to a middle school reading level, given to a mostly empty House chamber, before a largely odd-looking bunch of masked (vaccinated!) so-called American leaders.

It must have been a hilarious spectacle for our enemies around the world.  I tried to watch it, I really did, but just couldn’t stand it for more than a half an hour.

Yesterday, refugee contractor HIAS, in an e-mail to supporters, indicated that they had high hopes that there would be a renewed enthusiasm by Mr. Biden to expand the number of refugees to be admitted and that he would reaffirm that desire to the nation last night.

HIAS will be watching his remarks closely.

You probably followed the news last week, when the Biden administration announced plans to keep the number of refugees resettled in the U.S. at its all-time low level. Advocates like you immediately and fiercely called upon the administration to reverse the decision, and within hours, the administration committed to raising the refugee admissions ceiling by May 15.

The new deadline is less than three weeks away.

The e-mail goes on to urge supporters to keep the pressure on the White House.

Here is the text of Biden’s ‘government-is-here-to-take-care-of-you’ speech in which he mentions immigration.  The ‘R-word’ is missing.

As you read this, think about the fact that the Obama/Biden administration had EIGHT YEARS to lead an effort to fix “our war over immigration” and it failed to do so.

Now Biden is tossing this hot potato to Nancy and (LOL! ) to Kamala…

Read it all, but here is the section on immigration.

For more than 30 years, politicians have talked about immigration reform and done nothing about it.  [Joe forgets that he was there for those 30 years and more!—-ed]

It’s time to fix it.

On Day One of my presidency, I kept my commitment and I sent a comprehensive immigration bill to Congress [Hot potato toss to Nancy—ed].

If you believe we need a secure border – pass it.

If you believe in a pathway to citizenship – pass it.

If you actually want to solve the problem – I have sent you a bill, now pass it.

We also have to get at the root of the problem of why people are fleeing to our southern border from Guatemala, Honduras, El Salvador.

The violence. The corruption. The gangs. The political instability. Hunger. Hurricanes. Earthquakes.

When I was Vice President, I focused on providing the help needed to address these root causes of migration.

It helped keep people in their own countries instead of being forced to leave.  [What the heck is he talking about.  They came throughout the Obama/Biden eight years!—ed]

But the last administration shut it down.

I’m restoring the program and asked Vice President Harris to lead our diplomatic efforts. [Hot potato toss to Kamala, but didn’t he do that about a month ago?–ed]

I have absolute confidence she will get the job done.

Now, if Congress won’t pass my plan – let’s at least pass what we agree on.

Congress needs to pass legislation this year to finally secure protection for the Dreamers – the young people who have only known America as their home.

HIAS must be disappointed and further confused.

Frankly, I too am puzzled by Biden’s flip-flop-flipping-flop on his handling of the Refugee Admissions Program.

After all, he is the grandpappy of the forty-year (so far) plan to change America by changing the people known as the Refugee Act of 1980.