Thanks to a reader for alerting me to more news about churches in Wyoming hankering for their very own Afghans (I won’t call them refugees as they are not!) even as the governor has so far said Wyoming won’t be part of Biden’s airlift.

From the Daily Wyoming Cowboy:

CHURCHES in Wyoming hope to support Afghan refugees to live among them. The churches step in because their state is the only one in the United States that does not have a refugee resettlement program.

Wyoming Episcopal Bishop Rt Revd Paul-Gordon Chandler said he was greatly encouraged by the churches’ desire to “welcome the stranger.” 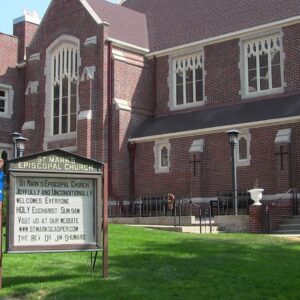 In a letter to the congregations last week, he said: “Some of the churches in our diocese are currently examining the possibility of accepting an Afghan refugee family or, in one way or another, supporting the resettlement of Afghan refugees in our country. For example, the sacristy of St. Mark’s Episcopal Church in Casper last month voted unanimously to begin investigating the process of sponsoring an Afghan family.

“Since Wyoming does not have a government-funded refugee resettlement program, it requires some creative thinking and close collaboration with the episcopal migration ministries whose mission is this sacred work.”

He said that while the office was not “lobbying” the governor’s office on the matter, it was having “encouraging talks”.  [I sure hope those of you concerned about changing Wyoming are having “talks” with the governor too!—ed]

The Rector of St. Mark’s in Casper, Wyoming, Revd Dr. Jim Shumard told ENS: “Most Afghan families want to go where there is an Afghan community. There is no community here. We pray that other local churches will support other families so that we can build a fellowship together. “

There is more.  Wyoming is just too white!

He is right, most refugees will simply up and move to be with their own kind of people.

Local church volunteers will burn out trying to supply all the needs of the newcomers who won’t have jobs for a long time, who won’t be able to drive themselves to anything, and who will expect certain culturally appropriate foods and so forth.  Eventually the ‘new Americans’ up and move to ethnic enclaves of their own kind with nary a farewell glance. I have seen it many times!

However, what their presence will bring is a resettlement contractor office such as the one mentioned in this article—Episcopal Migration Ministries—one of nine federal contractors (below for new readers)!

It bugs the heck out of them that Wyoming has resisted their “sacred work” for over 4 decades.