And of course the star of their story is the poster girl for Muslim refugees in America—Rep Ilhan Omar.***

Omar you know has been all over the news lately saying that Trump’s army of supporters is the Ku Klux Klan.  That might come as news to the thousands of ‘people of color’ who came out in Washington, DC last weekend for the huge rally in support of the President.

An Arab publication credits the Somali “community” in Minnesota and especially Omar for assuring the state would end up in the Biden column.

Nevermind that in September, investigative journalist James O’Keefe exposed possible voter fraud in that same ‘community’ here (fraud that now pales in comparison to the fraud that is alleged in key Democrat controlled cities in at least five states).

That is what more Muslim refugees will be bringing to your towns and cities if Biden is installed in the White House and begins the admission of 125,000 refugees in the first year!

Nearly 13,000 Somalis are already in the pipeline and ready to move to America.

From the New Arab which reiterates that the Somalis are in Minnesota thanks to Christian groups  (which were paid by the US State Department to place them in Minnesota, but they don’t tell you that).

Trump campaigned on hate in Minnesota. Somalis helped vote him out

It is long and you can read it all.  I’ll just highlight this point:

The resettlement of tens of thousands of Somalis in Minnesota – mainly during the height of the east African country’s civil war in the 1990s – was in large part thanks to voluntary agencies (also called VOLAGS), such as Lutheran Social Services, Catholic Charities, and World Relief Minnesota.

“Voluntary agencies” is a joke because they were handsomely funded by the US taxpayer to change Minnesota.

It wasn’t just in the 1990s. Believe it or not, George W. Bush admitted tens of thousands beginning after 911.

Somalis aren’t Arabs, but the New Arab took the opportunity to show where in the US Arab voting power was growing.

I went looking to see if I could find a map of Somali strongholds in the US and came up with this. It only shows where Obama placed the most Somalis over a 6 year period.

It does give you some idea where the Somali population centers are because resettlement contractors tend to send the different ethnic groups to join their ‘own kind of people’ thus creating ethnic enclaves. 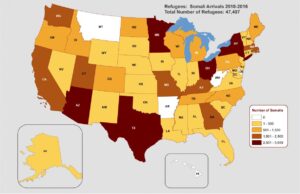 BTW, we will be hamstrung in coming months and years if Biden/Harris are coronated by the media (and our court system fails!) and make it to the White House because the enormously valuable data base that has for decades recorded how many refugees come into the US, where they are from and where they are placed has been gutted.

Those numbers and destinations that have been a great source of information for me here at RRW are no longer available.  I can’t believe the Trump people are responsible and suspect the deep staters made the move to hide from us what Biden promises to do on the refugee front (if he is president).

***I have written many posts about Rep. Ilhan Omar both here at RRW and at Frauds & Crooks.

Saying they brought out scads and scads of voters in key swing states for Joe and Kamala, Muslim leaders now say they want a significant place in any Biden administration (assuming there is one).

Joe reaches out and now he is expected to deliver….

From the LA Times:

In an election year defined by the COVID-19 pandemic, economic uncertainty and calls for social justice, a record number of Muslims have mailed in their ballots and headed to the polls, continuing a surge in voter registration and political engagement seen after President Trump took office in 2016, according to Emgage, a national get-out-the-vote group that focuses on Muslims. Emgage Action, an arm of Emgage, endorsed and supported President-elect Joe Biden.

Muslim organizers say that voters have often felt ignored by presidential candidates on both sides of the aisle, with the exception of Sen. Bernie Sanders’ two presidential campaigns. They expect thoughtful engagement on key issues and inclusion from the next administration, including considering Muslims for Cabinet- and upper-level positions.

Many were encouraged when Biden, as the Democratic nominee, engaged with voters as part of Emgage’s Million Muslim Votes plan, pledged to end the Trump administration’s travel ban on several Muslim-majority nations and promised to fill the position of Muslim American liaison in the White House Office of Public Engagement.

“The idea is that Muslims will be included in a Biden-Harris administration,” Deen, 41, said. “I am somewhere between cautiously optimistic and doubtful.”  [Doubtful? Thought they were sure Joe was their man.—ed]

For years, Muslim voters have watched as President Trump campaigned across the country, declaring that “Islam hates us” and calling for a “total and complete shutdown of Muslims entering the United States.” His administration passed a travel ban on Muslim-majority nations in 2017 and has repeatedly cut the cap for refugee admissions at a time when many Middle Eastern refugees are seeking U.S. asylum.

The Muslim community also would like to see the Biden administration change refugee limits to allow more people into the country after the U.S. reached a historic low under Trump, said Hussam Ayloush, executive director of CAIR’s Greater Los Angeles office — something that he hopes Muslim Americans themselves will be involved with as part of Biden’s team.

“We are definitely expecting a presence at a more senior level, and more serious engagement,” he said.

Then the Muslims interviewed go on to complain about the Homeland Security Department’s “countering violent extremism” program without ever mentioning that it was birthed in the Obama/Biden administration.

Sorry no time to write much today, but I want you to have something to read, so have a look at a report at the Center for Immigration Studies about aliens voting.

Surely, you have all pondered the fact that as aliens of all stripes get drivers’ licenses, they can simply check a box and register to vote in the licensing process.

No one asks that they produce their citizenship papers at the DMV!

Remember it isn’t just illegal aliens!  Refugees and other classes of legal immigrant can easily do this even if they haven’t yet gone through the citizenship process.

And, don’t you wonder how many of those hundreds of thousands of recipients of Temporary Protected Status are acting like legal citizens and voting?

Before you see the information I found at the Dept. of Homeland Security website, don’t miss John Binder at Breitbart Texas about the new bunch of Somalis deported to their home country, here, this month, a story featured on Drudge last night.

I took a few minutes this morning to look at data and came across this database at the Dept. of Homeland Security that tells us how many immigrants (country of origin) who naturalized in the years 2013, 2014 and 2015.
730,259 from many more than 100 countries (I got tired of counting!) became US citizens in 2015.
But, considering the fact that we have admitted far in excess of 100,000 Somalis to the US going back decades, I was surprised at how relatively low their naturalization numbers are.  (Checking Wrapsnet I see we admitted 102,392 Somalis since FY03 with 5,244 coming just in the last 7 months).
At present naturalization rates, they could hardly be much of an electoral force except for in places like Minneapolis, MN or Columbus, OH where large numbers have congregated to form ethnic enclaves.
First here are some of the major ethnic groups naturalizing at high rates (for 2015):

Here is one little segment of the data base showing the Somali naturalization numbers dropping from 2013-2015:

On Thursday we reported that some of Obama’s illegal alien “Dreamers” are voting.

And, I should mention that I’ve been asked several time recently if I thought illegal aliens or more importantly legal immigrants, like refugees, are voting before they have even gained citizenship and I’ve said:  Of course they are!  They simply check ‘yes’ to the citizenship question when they get a drivers license and they are good to go because no one ever cross-checks.

This Washington Post story (can we believe our eyes that this is in the WaPo?) confirms what we have only surmised (hat tip: Paul).  You can read the whole thing yourself but the section that interested me most was the one on the Minnesota Al Franken victory which we reported on extensively in 2008 (here is one of several posts we wrote at the time) may well have been decided with the help of Somali illegal voters.

From the Washington Post (although they don’t use the ‘S’ word!):

Because non-citizens tended to favor Democrats (Obama won more than 80 percent of the votes of non-citizens in the 2008 CCES sample), we find that this participation was large enough to plausibly account for Democratic victories in a few close elections. Non-citizen votes could have given Senate Democrats the pivotal 60th vote needed to overcome filibusters in order to pass health-care reform and other Obama administration priorities in the 111th Congress. Sen. Al Franken (D-Minn.) won election in 2008 with a victory margin of 312 votes. Votes cast by just 0.65 percent of Minnesota non-citizens could account for this margin.