“[We] are hearing the President-elect speak in the language of social justice!”

He did it yesterday in a recorded message to a leading group that advocates for more refugees for your towns and cities—Jesuit Refugee Service which by the way received $19,478,560 of US taxpayer dollars (grants and contracts) in the last 12 months according to USA Spending.

The Washington DC-based Jesuit Refugee Service USA is one more taxpayer funded ‘non-profit’ that can not survive financially on its own.  The “social justice” group requires a massive infusion of your tax dollars every year in order to survive. In case you are wondering there is no separation of “church and state” when it comes to the US Treasury funding ‘religious’ social justice advocacy groups.

In fact, they are even more awash in your money in the last year than they were in 2019!  See page from their 2019 annual report below***

Biden pledges to raise refugee ceiling to 125,000 in address to Jesuit group

President-elect Joe Biden announced he will raise the number of refugees allowed into the United States to 125,000 in his first year in office, a major reversal from President Donald Trump’s steep cuts to the U.S. refugee program.

By way of comparison, President Trump set the ceiling for FY2021 at 15,000 and admitted 9,772 in FY20. Under the Refugee Act of 1980, that Biden helped create, the President  is solely responsible for setting the admissions ceiling.

It’s not the first time Biden has made that pledge. He previously floated the number in a statement he made during the summer on World Refugee Day.

But it is the first time he has confirmed that number as president-elect.

And, notably, he made the announcement Thursday (Nov. 12) to a Catholic group that works with refugees.

“The United States has long stood as a beacon of hope for the downtrodden and the oppressed, a leader of resettling refugees in our humanitarian response,” Biden said in a prerecorded video set to air during the virtual event celebrating the 40th anniversary of Jesuit Refugee Service.

“I promise, as president, I will reclaim that proud legacy for our country. The Biden-Harris administration will restore America’s historic role in protecting the vulnerable and defending the rights of refugees everywhere and raising our annual refugee admission target to 125,000.” 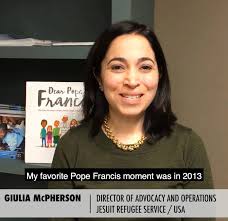 “That he chose to make this announcement with us tonight is an indication that President-elect Joe Biden is following his faith when it comes to American policy to protect and welcome refugees,” Jesuit Refugee Service Director of Advocacy and Operations Giulia McPherson said in a written statement.

“Not only is it exciting that the United States will once again welcome refugees at an historically high number, but it is also significant that we are hearing the President-elect speak in the language of social justice about the rights of refugees and our call as people of faith and as Americans to accompany them to safety.”

Faith-based organizations, like Jesuit Refugee Service, have long played an important role in refugee resettlement work in the U.S.

That is something they could not do without extracting your taxpayer dollars to do it because there isn’t enough support in the form of real private charity for what they do—help change America by changing the people.

As I said here last week, there are over 27,000 Muslim refugees in the pipeline waiting for Biden to say the word!