Trump wants to protect the American worker first and foremost!

That is the gist of the news from an Epoch Times piece published a couple of days ago.  (Hat tip: Judy)

President Donald Trump’s administration, if he is reelected, will toughen its stance on immigration and entry into the United States with the aim of protecting the wages and safety of Americans, a senior adviser to the president told NBC News in an interview on Oct. 29. 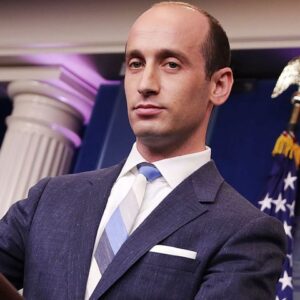 Stephen Miller, who noted that his remarks were being made only in his capacity as campaign adviser, said Trump’s second-term immigration agenda would involve “raising and enhancing the standard for entry” into the United States and cracking down on illegal immigration, including by tighter restrictions on work visas, stricter visa application screenings, banning “sanctuary cities,” and limiting the number of people granted asylum.

He said the measures would be accomplished through a combination of executive actions and legislation.

“In many cases, fixing these problems and restoring some semblance of sanity to our immigration programs does involve regulatory reform,” Miller said. “Congress has delegated a lot of authority … and that underscores the depth of the choice facing the American people.”

Then I got a chuckle out of this story at the South Seattle Emerald, published yesterday:

‘HATEMONGER’ EXAMINES STEPHEN MILLER, THE EXTREMIST AT THE HEART OF TRUMP’S WHITE HOUSE 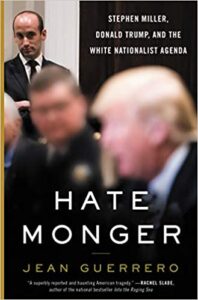 As the COVID-19 pandemic raged through the world in the spring, Trump’s senior advisor Stephen Miller saw it as a unique opportunity to implement his extreme anti-immigrant policies, according to investigative journalist Jean Guerrero, whose new book,Hatemonger: Stephen Miller, Donald Trump, and the White Nationalist Agenda, was published in August.

COVID-19 allowed Trump and Miller to fulfill their dream of closing the U.S. Mexico border to asylum seekers; before the pandemic, federal asylum law made this impossible. They could now suspend refugee resettlement and the processing of green cards, slowing legal immigration under the guise of protecting American jobs.

Drawing on documents and over 150 interviews, Guerrero’s book covers Miller’s upbringing and his rise through right-wing media and into the White House, becoming Trump’s trusted advisor.

Miller hasn’t yet achieved his wish list on immigration policy. But as Guerrero explores in Hatemonger, it aligns alarmingly with that of white nationalists.

Now here is my favorite part:

So we are told that Miller was mentored by a white nationalist named Larry Elder!  Did Guerrero think her readers are too dumb and might not have a look at a picture of Elder? 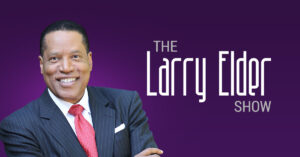 All I can say is the Open Borders Marxists are scared to death!  Four more years of Trump and Miller will make their heads explode.  Fingers crossed!