“Tragically, in the last four years, we have seen this program become politically divisive and a lightning rod for no good reason, except for scoring political points.”

And, one of their planned new (?) tactics is to tell more refugee stories for media consumption!  Hire more communications personnel! Tell more stories!

When I began writing this blog in 2007, that was one of the things that fired me up!

Every time you turned around there were emotional tear-jerking stories in local and national media about how a struggling refugee came to be in America and how great life was now that he/she lived in some American multi-culti slum!

I called the stories, ‘refugees see first snow’ stories when what I wanted was real reporting on the pros and cons of placing refugees in unsuspecting communities.

My refugee alerts these days are filled with articles like this one from Sojourners (a ‘religious’ Left publication):

UNDER A NEW ADMINISTRATION, CAN REFUGEE RESETTLEMENT BE DE-POLITICIZED?

On Nov. 12, at a virtual event celebrating the 40th anniversary of Jesuit Refugee Service, President-elect Joe Biden doubled down on his promise to increase presidential determination for annual refugee admissions to 125,000. That pledge marks a big increase from the record low of 15,000 refugee admissions President Donald Trump had set for the 2021 fiscal year.

Forty years later [Refugee Act signed into law in 1980 by Jimmy Carter.—ed], the all-time low numbers of refugees resettled in the United States is concerning. But, according to refugee resettlement experts, that number is a symptom of a larger, more alarming problem: Refugee resettlement has become a partisan issue.

You know why it has only in recent years become a hot potato issue?  For 30 of the last 40 years no one had any understanding of what the hell these contractors had been doing.  I like to think I helped educate the public about the refugee industry!

“Tragically, in the last four years, we have seen this program become politically divisive and a lightning rod for no good reason, except for scoring political points,” said Krish O’Mara Vignarajah, president and CEO of Lutheran Immigration and Refugee Service (LIRS). “… My hope is that we can have a serious discussion that could help insulate the program from the political whims of a future executive branch that would once again seek to use refugees as a political cudgel.”

Watch for it!  This is what they want—a refugee floor—so that no future President could dramatically reduce the number of refugees because those refugees represent the contractors’ income.  Fewer refugees means less money for their coffers.

“Part of the discussion we need to have in the coming months and years ahead is how do we create a more predictable and bipartisan system that potentially sets a refugee floor, in addition to allowing the president to establish a ceiling,” said Vignarajah, who came to the U.S. with her family as a refugee in the late ’70s.

Along with the eight other organizations that contract with the State Department to resettle refugees in communities across the country, LIRS is taking steps to make bipartisan support of refugee resettlement a reality, in part, by doubling its communications staff in an effort to dispel myths around resettlement.

Think about this!  Your tax dollars pay for big salaries so they can tell their “stories” to the media!

“We’re in the business of storytelling so people understand who a refugee is, and why they pick up with the limited belongings they have and come halfway across the world,” Vignarajah said. “In this kind of environment, we need to do a better job of communicating who we are and what we do and who refugees are.”

According to Naomi Steinberg, vice president of policy and advocacy at Hebrew Immigrant Aid Society (HIAS), the conversation around refugee resettlement has become “toxified” over the past four years.

Among their requests of the incoming Biden administration:

Inform Congress of their intent to welcome 125,000 refugees and deliver a report to Congress that makes a case for increased appropriations for refugee resettlement.

Set the presidential determination with slots allocated according to regional needs, which allows the resettlement effort greater flexibility in meeting refugees’ needs.

Invite experts at the State Department and the Department of Homeland Security into the larger discussion on refugees.

Immediately signal to the United Nations the intent to resume United Nations High Commissioner for Refugees referrals domestically and internationally so that they can devise a process quickly and efficiently.

It’s been awhile since I checked the income and salaries of the story tellers at LIRS.

Here is a page from the most recent Form 990 I could find (2018). Under Trump they are 87% federally funded (down about $10 million in federal grants since a top Obama year).

To listen to them whine you would think Trump made them find PRIVATE charitable money.

And here is the same page for 2015 (under Obama they were 95% federally funded):

Now have a look at the salaries.

But, first here is a headline of a post I wrote in February 2018. There has never been any adequate explanation for Hartke’s sudden departure.

You will see here (below) when comparing the salaries reported to the IRS for 2015 and then 2018, that Hartke did exceptionally well in her last year at LIRS.

We do not yet have any record of the salary the new CEO—Krish O’Mara Vignarajah—is getting, but must assume it is in the same pay range as the salary of Ms. Hartke.

Here are the salaries for top execs at LIRS in 2015: 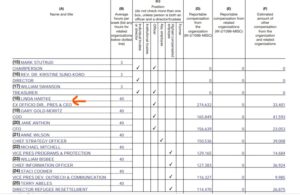 Here are the salaries for those who survived the inner turmoil that shook LIRS in 2017/2018.  See that Hartke’s salary jumped about $100,000 in just three years as she walked out the door!

And, on your taxpayer dime!!! 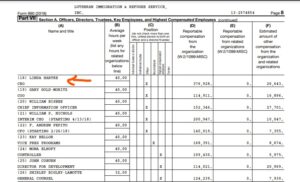 Doing well by doing good! Tell your kids to grow up to be charitable execs at ‘religious’ non-profits funded by the US taxpayer!