The fiscal year ended yesterday and the totals are in at the Refugee Processing Center.

The exact total for the year is 11,814 the lowest number in four decades.

The ceiling for admissions had been set by President Trump at 18,000 and that number likely would have been reached except for the travel restrictions placed by the UN as the Chinese Virus spread around the world.

Making up for lost time, the administration admitted 2,626 in the last 30 days, the highest monthly number for any month in the past fiscal year.

However, for me and I expect for many others tracking refugee admissions on a regular basis, you will have a shock when you see this notice at the Refugee Processing Center.

The Bureau of Population, Refugees, and Migration (PRM) of the U.S. Department of State is building a new IT system to facilitate refugee processing. Effective October 9, 2020 at 5:00pm ET, PRM’s Refugee Processing Center will no longer be able to provide certain previously available reports and interactive reporting will no longer be available.

Interactive reporting has been the most valuable portion of the data available and its removal will put us in the dark about which towns refugees are placed, their demographic makeup, their religions, etc.

Are the deep staters getting ready to expand in a Biden administration and want to keep us in the dark about who is coming into the country?

Do Trump’s people even know!

If you have been using that data base, you have a week to capture information through Interactive reporting.  There will be broader data still available, but interactive data allowed for a deeper drill down into information over whatever time period one entered as a parameter, even on a daily basis.

I guess these will be the last maps I will be posting as they are generated at Interactive reporting.

Here is where refugees were placed (11,814) over the last 12 months (the FY runs from October 1 to September 30th of the following year).

Interesting that so many of those states are states the Dems want to control once they change enough of the people. 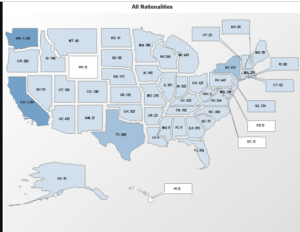 Here is where the refugees arriving in America (2,626) were placed during September: 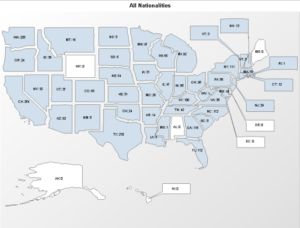 For those of you who have never used the data at Interactive reporting, I explained how to do it here in ‘Knowledge is Power IV.‘ Better hurry if you want to try it out and capture some data about your state.

No word yet, as far as I know, about the Presidential determination for FY2021 which is usually submitted to Congress for consultation before October first.

See tag FY2021 for all of my posts in recent weeks on this coming year’s Presidential determination.