Just now as I read this latest salvo against HIAS  (one of nine refugee contractors that monopolize all resettlement to the US) charging that the ‘Jewish’ group has been snuggling up to Islam-first groups like CAIR and Islamic Relief, I went back to the Refugee Council USA members page that I had partially screenshot only a week ago when I wrote about the growing storm over the leadership of the Conference of Presidents—an organization that brings together groups that support Israel and the Jewish people.

I took this screenshot only a week ago of the membership page of RCUSA which is the lobbying arm of the refugee industry in the US.

There were 29 groups listed as members.  Islamic Relief USA was one. 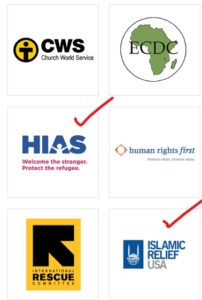 But somewhere between Monday and Friday this past week, Islamic Relief USA was removed (or removed itself) from the membership roster.  See a screenshot today!  There must be a story here! 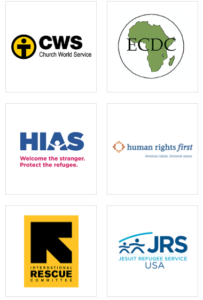 Just to be sure I wasn’t hallucinating I went to the Wayback Machine and found that on April 27 Islamic Relief was still there and that RCUSA touted 29 member groups.  Today it is 28 members. 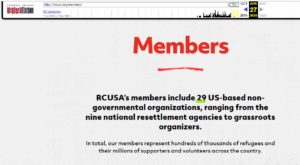 Here is the Member page today: 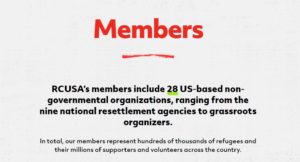 So, the question is, did Islamic Relief quit or did they get the boot!?

We will likely never know because RCUSA is a secretive organization I’ve been trying to learn more about for years.

On the day a few weeks ago when my internet went down I was planning a post about them.  They have a paid staff, they have a Washington, DC office, they are active ‘educating’ Congress about the need to bring in more refugees, they reach out to grassroots open borders activists to give them instructions, etc.

They are not incorporated (as far as I can tell), they are not a 501(c)3 charitable organization, but supposedly their banker is Church World Service.

However, when I searched through CWS’s Form 990s I found no mention of money that passes through CWS to RCUSA.

In 2017, we learned that RCUSA paid (or planned to pay) the Podesta Group $100,000 to lobby Senate and House members for more refugees and more money. (Later in 2017 the Podesta Group “ceased to exist” so it is unclear if the funds were paid out for the lobbying campaign.)

(I think you need to see the entire plan the Podesta Group had crafted for RCUSA in March of 2017.)

Where would that money come from if RCUSA (apparently) doesn’t exist as a business or as a non-profit group?

I won’t use the word, but can you hear the washing machine running?

See my many posts on the Refugee Council USA by clicking here.