As I said the other day, there isn’t much news about refugees in the US in the wake of the Chinese virus shutdown except for the fluffy-puffy stories like this one from St. Louis where we learn about the challenging times (no jobs!) a new refugee family from the DR Congo is having as they arrived in the US (in March!) in the midst of stay at home orders.

Still no word when the US would fully open the refugee pipeline, however I see that according to data at the Refugee Processing Center  we have admitted 35 refugees since May 1.

None came from the DR Congo.  They came from various countries with the largest number (14) coming from Syria.  Those 14 Syrians were resettled in Idaho, NY and NC.

Meanwhile the Chinese Virus has caused some shifting in target countries (we are told) with fewer migrants seeking asylum in Germany and more going to Spain. Of course that makes no sense to me as Spain has a huge death toll from the virus.

However, this was enlightening and surely explains the attraction to Spain: Spain is welcoming large numbers of asylum seekers from Colombia, Venezuela and Honduras.  They must be flying into Spain and simply asking for asylum when they land.

From I am Expat.  Story also at Deutsche Welle, here.

Germany no longer top destination for asylum seekers in Europe

The number of asylum seekers arriving in the European Union decreased significantly in the first quarter of 2020. Spain has overtaken Germany as the country receiving the most asylum applications – suggesting that the coronavirus epidemic is shifting long-standing migration patterns.

Asylum applications in Europe down 25 percent

From the beginning of January to the end of April, a total of 164.718 asylum applications were submitted. During the same period in 2019, more than 220.000 applications were received. This year, Spain received the most applications (37.471) – mostly from migrants from Colombia, Venezuela and Honduras.

The uptick in migration from Latin America means that Germany – traditionally the top destination in Europe for asylum seekers – fell in the first quarter of the year to second place, with 33.714 applications, of which 23 percent came from Syria, 9,3 percent from Iraq and 7,7 percent from Afghanistan.

Another reason Germany may have lost its luster is that Germany requires asylum seekers to live in reception centers and there are an increasing number of reports of asylum seekers held in German refugee ‘camps’  infected with COVID-19.

Open Borders activists are raising a ruckus, but note that most of those who tested positive are asymptomatic or have only mild symptoms. 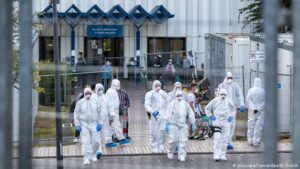 At least 70 people at a refugee home near Bonn have tested positive for COVID-19. News of the outbreak prompted calls for better protection for asylum-seekers and more testing at the often crowded facilities.

Most of the people who have tested positive for the virus either had mild or no symptoms, the district government said.

The residents who tested positive have been isolated, authorities said, adding that 60 people whose tests came back negative have been transferred to another home.

News of the outbreak prompted swift criticism, with politicians urging for better protections for asylum-seekers.

Asylum-seekers in Germany are required to live in “reception centers,” or shared accommodations, during their asylum applications. Many live with several hundred other inhabitants, with some sharing rooms with strangers.

The conditions and lack of privacy in Germany’s facilities for asylum-seekers have long been criticized by refugee and immigrant rights groups, with the coronavirus pandemic raising fears among asylum-seekers and activists alike.

My ‘Invasion of Europe’ archive is here.

In case you are wondering how the Rohingya in Bangladesh are faring with the arrival of the virus, there is no additional news and apparently no spreading like wildfire yet.  We are watching!