“They’re coming to benefit to consume and to establish themselves inside other people’s countries with the goal of eventually turning Europe into an Islamic state.”

(Ret. Col. Douglas Macgregor on the invasion of Europe)

According to news accounts in the last week or so, the President has signaled that he is considering nominating Retired Army Col. Douglas Macgregor for Ambassador to Germany.

As you might expect the Leftwing media is going crazy over his views on immigration that he has made crystal clear in interviews in recent years, including on Tucker Carlson’s show.

***Update*** Jewish groups join CAIR in demanding Macgregor’s name be withdrawn.  So watch, it will be.

(CNN)President Donald Trump’s nominee to become the US ambassador to Germany has a history of making xenophobic and racist comments about immigrants and refugees in both Germany and the US.

Retired Army Col. Douglas Macgregor, a decorated combat veteran, author and frequent guest on Fox News, claimed that Muslim migrants were coming to Europe “with the goal of eventually turning Europe into an Islamic state.”

He criticized Germany for giving “millions of unwanted Muslim invaders” welfare benefits rather than providing more funding for its armed services.

Macgregor’s newly unearthed comments come as the Trump administration announced it will withdraw nearly 12,000 troops from bases in Germany. The decision to remove troops from Germany was slammed by Republicans, Democrats and former senior military officials, who said the move would benefit Russia. 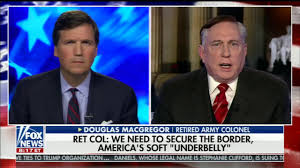 CNN’s KFile reviewed dozens of radio and television interviews with Macgregor and found he often demonized immigrants and refugees.

He warned Mexican cartels were “driving millions of Mexicans with no education, no skills and the wrong culture into the United States, placing them essentially as wards of the American people.” He repeatedly advocated to institute martial law at the US-Mexico border and “shoot people” if necessary.

“The Germans, thanks to us, don’t feel obligated to defend themselves. And the President has simply said, ‘look, why should the American taxpayer defend you if you aren’t willing to defend yourself?'” Macgregor said in 2018.

Macgregor’s criticisms of Germany extended to its immigration policies. He said, “These people are not coming to assimilate and become part of Europe.

They’re coming to benefit to consume and to establish themselves inside other people’s countries with the goal of eventually turning Europe into an Islamic state. That’s a bad thing for the West. It’s a bad thing for Europeans,” said Macgregor in a radio interview in June 2016.

He lamented in an interview posted in 2015 that the European Union provided “very luxurious and extremely expensive welfare” benefits to Muslim refugees during the height of the global migrant crisis and that “these people are not coming to assimilate or become Europeans–quite the opposite. They’re coming to take over whatever they can get.”

He further attacked the German military and government in 2018 for having “practically no armed forces” and instead spending money on “unwanted Muslim invaders.”

There is much more, see here.

Thanks so much to CNN for helping to identify an American patriot who tells the unvarnished truth.

By the way, to hear the Left tell it, Trump is on his way out, so why worry about an Ambassador who they assume would only be on the job for a few months?

This post is archived in my ‘Invasion of Europe’ file where I have chronicled exactly what Macgregor says is happening for the last ten years.