There is no question that a record will be set this fiscal year for the low number of refugees admitted to the US and moved to a town near you.

Checking the data just now at the Refugee Processing Center I see that as of yesterday, August 1, 7,905 refugees have been admitted since October 1, 2019 (the first day of fiscal year 2020).

In the fall of 2019, the President, by law, set the ceiling (maximum number to be admitted) at 18,000, but as of yesterday, not even half of that number has arrived (with only two months to go).  Of course a lot of that has to do with the worldwide travel restrictions due to the Chinese Virus.

But, even with the virus supposedly spiking and millions out of work, we admitted 151 new poor people to America in the month of July.

Don’t ask me why we are bringing supposedly persecuted people here from those two Central American countries!  More mouths to feed, shelter to provide and more medical treatment required.

Here is a map of where the most recent batch of 151 were placed.

The refugee industry must be going mad with rage….. 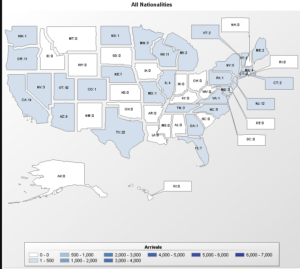 In a few short weeks the jockeying will begin as another decision will be made, this time for Fiscal year 2021.  The President should be sending his determination to the Hill sometime in September.  We will be watching (as America is changed by changing the people)!