And, you can be sure that right now the “interfaith community” is getting in gear for what they anticipate will be a great blue wave in November and they will all be back in business when Biden/Harris fling open our borders to the third world beginning in January.

Of course you are probably reading this and thinking: don’t we need to get our people back to work and get through the Chinese virus panic before you hit the Hill with your strategic lobbying for more refugees and for more payola!

No!  While you are distracted they are busy as they always are working all the angles to get more funding and influence more members of Congress to see things their way.

If a member is Catholic—send in the Catholics!  Jewish? Send in HIAS.  If the Muslims want an entree? The Catholics and the Jews will help make that possible.

This article at Devex describes the basics of well-organized lobbying efforts in Washington that you, average citizens, can NEVER match.

These are all well-funded organizations with high paid staff working 40-hour work weeks, 52 weeks a year to influence Congress, and they hope very soon to get back into the White House.

‘We can be very strategic’: How faith-based NGOs advocate on Capitol Hill

WASHINGTON — Many NGOs dedicate time to advocacy (aka lobbying) on Capitol Hill to garner support for development and humanitarian policies and funding, but faith-based organizations work together to bring a different perspective to these lobbying efforts.

“We, at one level, are doing what everybody’s doing, which is trying to understand to the greatest extent we can what drives a particular member.And that is as varied as the membership in the House and Senate,” said Bill O’Keefe, executive vice president for mission, mobilization, and advocacy (aka lobbying) at Catholic Relief Services.***

“We do look at what is the religious background of this member, and is there a particular appeal that we can authentically make that would make a difference in this case?”

CRS aims to meet with every member of Congress regardless of the member’s religious affiliation, O’Keefe said. The organization’s work to eliminate causes of poverty and injustice is rooted in principles of Catholic social teaching, a tradition that bolsters the NGO’s reputation and allows it to work well with members on both sides of the aisle, he said.

CRS works closely with other faith-based organizations — both those that are part of what O’Keefe calls “Team Catholic,” as well as those of other faiths — on the Hill to coordinate advocacy (aka lobbying) efforts for certain bills or funding requests.

The NGOs determine what type of appeal may be most effective with particular members who may have seats on relevant committees or from whom they want support.

“If there is an office where the elected official is a strong Catholic, it wouldn’t necessarily make sense for HIAS to take the lead on that meeting,” said Naomi Steinberg, vice president of policy and advocacy (aka lobbying) at refugee resettlement organization HIAS.

“Every single day we are in partnership with other faith organizations and we work in coalition on a lot of different issues. What we find is that we are all heading in the same direction and certainly we sometimes might have different strategies, but through the coalition, we really do speak with one voice.

The value of us coming from different faith traditions is that we can be very strategic.”

HIAS began as an agency that resettled Jewish refugees in the U.S. Now, it is one of nine refugee resettlement agencies in the country that works with people of all faiths as well as with refugees abroad — issues Steinberg said have become unfortunately partisan during the Trump administration.

Her team works to develop relationships with congressional offices even when they are not pushing for a particular policy or funding so that when there is a tougher issue on which they seek support, they have existing contacts to tap.

I was a lobbyist decades ago and I can assure you that this is where they spend a lot of their time building their influence. They make friends with staff members and spend time with them, often outside of regular work hours, so that naturally when the lobbyist needs something, they can get a phone call returned or even get an entree to the member on short notice.

HIAS also ties this advocacy (aka lobbying) closely with its grassroots efforts on refugee issues, which includes urging Jewish communities across the country to contact their members of Congress to express their support for more funding and higher refugee resettlement caps.

“One of the messages we share with our grassroots advocacy network … is you should never assume that even if your elected official has been on the right side of these refugee issues, that they know how important this is to you, to their constituency,” Steinberg said.

“Keep those calls coming, keep those emails coming. Because we want them to know that people in their district vote partially based on these issues.” [Other than NumbersUSA and FAIR, with limited staff and financing, I don’t know any other organizations doing this on the immigration restriction side of the debate.—ed]

Politics can also impact inroads faith-based organizations are able to make on Capitol Hill. Jihad Saleh Williams, senior advocacy  (aka lobbying) and government affairs advisor at Islamic Relief USA, said his organization can have difficulty getting a response from Republican offices who are nervous to meet with a Muslim organization with which they may not be familiar.

As a former congressional aide, Williams said he understands the instinct of Hill staffers to protect their boss at all costs, and that IR USA must understand “discreetness” required for some of its meetings.

Many offices incorrectly believe that the organization only works in the Middle East, he said, or only deals with civil liberties and counterterrorism issues. By educating members about work to promote food security and health access — particularly during COVID-19 — in the U.S., Williams said he can gain an entry point to promote the value of international development and humanitarian work as well.

NGOs use interfaith coalitions to work together to counter such misconceptions about particular groups, positioning faith-based organizations as a united block that support the same issues, regardless of religious affiliation, to strengthen their power on the Hill.

“I really have tried to work hard over time, particularly with Islamic Relief and with other minority religious groups in the United States, to make sure … when people think of the faith community, they don’t just think of the Christian community,” O’Keefe said.

“We partner a lot with Islamic Relief and consider them brothers and sisters in this development and humanitarian world.”

No wonder they are busy lobbying on the Hill.

Here is the salaries page from that Form 990. Sean Callahan sure is doing well by doing good! 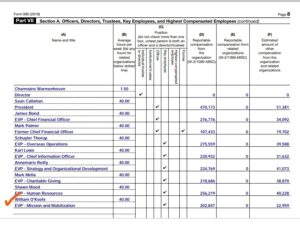 Personal anecdote:  About 20 years ago I had a reason for wanting to help a Catholic convent in Danang, VN. The sisters there are devout Catholics who had spent a couple of decades in the rice fields when the Communists took over the country.  By the year 2000, the government had lightened up on them and they were back running an orphanage and a school for young children, but they needed financial help.

In my naivete I called Catholic Relief to see if they could help that convent and was told “That isn’t what we do!”

Now I have a better understanding of what they do—big fat salaries, lobbying efforts to garner more funding, and efforts to bring more Muslims into the US is what they do! Nuns in Vietnam who love America can go pound sand.