The refugee industry is getting really desperate as they bring out their old ‘bigwigs’ and use the ghost of Ronald Reagan to stick it to ‘orange man’ who is trying to limit the number of diseased people entering the US.

As you most likely know Jimmy Carter, Ted Kennedy and Joe Biden teamed up in 1979 to push through the Refugee Act of 1980 which only went into action to change America in Reagan’s first term in office.

James N. Purcell says he is one of the creators of the Carter Act and became an early head of the program under Reagan.

Reagan admitted hundreds of thousands of Vietnamese and Southeast Asian refugees escaping Communism during his 8 years in office.

Purcell has been out and about in recent months to fill the elder statesman role in the Open Borders Lefts’ war on Trump.

My question is this:  Just because it is now 40 years old, does it mean that somehow the Refugee Act is sacrosanct and can never be changed, or dumped completely?

Here is Purcell at the Dallas Morning News yesterday:

Reagan refused to allow fear of disease to halt refugee resettlement, and Trump shouldn’t either

[Before I give you a few snips from what he says, know that we are admitting refugees and have been for decades who have TB and some of those have active TB.  I always thought that would be something that would make the general public sit up and take notice of flaws in the supposed ‘health screening’ of refugees, but so far it hasn’t.  Obviously Trump has thankfully noticed. See my extensive file on refugee TB by clicking here.]

Now here is some of what Purcell said, but please read it all (emphasis is mine):

Rep. Sam Hall [Democrat!—ed] was relentless as he questioned me about the Indochina refugees we proposed to admit to the United States: Are these refugees free of tuberculosis? Is the American public in danger? I recalled these congressional oversight questions from 40 years ago with great trepidation when I learned recently about the Trump administration’s current attempts to bar refugees and migrants on health grounds.

It was September 1981 as I pondered questions from the late Democratic congressman from Texas; eight months into the new Reagan administration, I was representing the State Department at these “consultations” hearings as acting director of the Bureau for Refugee Programs. Along with me were acting representatives from the Departments of Health, Education and Welfare and Justice, and the Voice of America. The Refugee Act of 1980 required administration representatives to consult with the judiciary committees of both houses on future admissions. Rep. Ron Mazzoli of Kentucky was in the chair and all members were present, as well as an overflow audience.

…..my colleague Paul Wolfowitz (assistant secretary for East Asia and the Pacific) and I had agonized for weeks about the deteriorating refugee situation in Asia and the critical importance of these make-or-break hearings. Wolfowitz warned, “Vietnamese refugees continue to flee the new communist regime that took over after the fall of Saigon, and persecuted victims from Laos and Cambodia are also on the move. All are flocking to the non-communist states of Southeast Asia. Our experts warn that refugee flight shows no signs of ending.”

The State Department’s advance team had alerted us that TB was a major concern. When Hall raised his questions, I described the medical checks we conducted for refugees prior to departure from Asia. Each was carefully screened before departure by the Geneva-based Intergovernmental Committee for European Migration, using guidance from the Centers for Disease Control and Prevention and the U.S. Public Health Service. I described two types of TB, communicable and non-communicable, and emphasized that “no refugee with communicable TB was admitted to the United States; while a few with non-communicable TB had been admitted, they were not a threat and could best be treated here.”  [Yep, we took on the role of treating thousands upon thousands of refugees with latent TB and that job went to local health departments in your communities—ed]

The committee was not satisfied with my testimony, and the notion of an admissions moratorium had arisen.My reaction was clear and unambiguous: a moratorium would lead to disaster and death in Southeast Asia and must be avoided. I realized my explanations had not gotten through when the national news that evening reported, “500,000 ticking time bombs in the U.S.”

An admission moratorium was contemplated by the Hill committee!

Readers, this is quite a revelation.  Did the committee think they had the power under the Refuge Act to suggest such a thing?  Today “consultations” happen behind closed doors with only the principals involved—the State Department rep and some committee chairmen.

Again, the consultation today is CLOSED TO THE PUBLIC!

Later, when the U.S. accepted the protocol to the U.N. Convention Related to the Status of Refugees in 1968, the president accepted that, “deportation of a refugee is a particularly serious measure, and it would not be humanitarian to deport a refugee for reasons of health.” By this action, the United States recognized that it could not expel a refugee for a “contagious disease” when we could offer acceptable treatments. Congress codified the obligation in the Refugee Act of 1980.

It became clear that actions we proposed were consistent with evolving policy and practice. Nevertheless, several members remained unconvinced. When the committee voted several days later, the moratorium was defeated by one vote. This was a narrow and a key victory, as it confirmed the legal and policy precedent for the next 40 years.

That must have been the first and last strong stand Congress ever took on the Carter/Kennedy law that opened the door to impoverished (and sick) people to legally flood into America.

The refugee industry today wants no restrictions for health reasons.  Our healthcare system (which you pay for) can just fix their health problems they say. 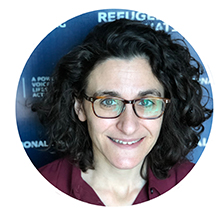 But, shockingly, the idea is with us again with the Trump administration’s proposed Security Bars and Processing Rule. According to Yael Schacher, historian with Refugees International, this rule would “expand the definition of national security to incorporate public health bars in an unprecedented, unnecessary, and arbitrary way that would enable refoulement, or the return of asylum seekers to persecution.”

As with hundreds of other rules and policy shifts designed to restrict and limit refugee and immigrant admissions to the United States, this rule fails to safeguard public health or uphold laws and treaties protecting people fleeing persecution. Getting a jump-start, the CDC has already put an order in place that closes the border to those without documents on health grounds, regardless of persecution. [“without documents?” means they are not refugees selected through the US Refugee Admissions Program.—ed]

This rule must be opposed.

By the way, Purcell doesn’t utter the word COVID.

But, especially in this time of a worldwide pandemic, sensible Americans can see that Trump has America first in mind, so let him know that you are grateful for that.