And did you know! Forcibly displaced people declined in 2020!

As I said in my previous post this morning, September is the big month for pressuring the President to set a high ceiling for the number of refugees to be admitted to the US in the fiscal year that begins October first.

I was curious to see if I could find out who is behind this year’s ‘WelcomingRefugees2021.org” campaign and as best as I can figure out it seems to be the Lutheran Immigration and Refugee Service federal resettlement contractor which has a special “toolkit” for the project here.

I’m guessing however that most of the other eight contractors are helping to gin-up local elected official support to pressure the President to set a ceiling of 95,000 refugees for the upcoming year.

Although 95,000 seems to be the magic number again this year, the letter they have prepared for Trump this year leaves that number out.  I’m guessing that is because it is so high it would turn off prospective local elected official support.

Be sure to see who in your state signed it!

Take note of the fact that the number of daily needy refugees has dropped from last year.  Wow!  It is not often that the scaremongers actually report a reduction in the numbers!

Each day, an estimated 44,000 people are forcibly displaced from their homes due to violence, persecution, or war.

Each day, an estimated 37,000 people are displaced from their homes due to violence, persecution, or war.

The goal is to get this year’s letter signed by as many local and state elected officials they can wrangle by a week from today!

1,318 refugees moved to America in the month of August. That is a huge jump from the previous COVID ‘crisis’ months that saw 522 arrive over a four month period from April through July.

Forty states welcomed the third worlders who will now need shelter, food, and medical care as US citizens continue to struggle themselves with those same needs.

Here is the map for August from the Refugee Processing Center. 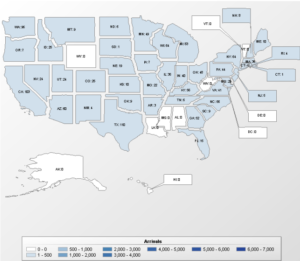 Presidential Determination for 2021 due by the end of the month!

September 30th marks the end of the fiscal year and the President is required to tell Congress this month how many refugees the administration would like to admit in the coming fiscal year.

I haven’t seen anything yet about where the negotiations stand, but if this is like other years there is much negotiating going on behind the scenes.  Of course the President could put off making any determination in light of the more important business facing the federal government right now.

Even if Trump sets a low ceiling, as he has done in previous years, it is just a ceiling and doesn’t mean that it must be reached.  And, if Biden succeeds in November, all bets are off.

I thought you might be interested in this data at the Refugee Processing Center which shows the ceiling and the actual admissions for the last ten years. Take note of the fact that Obama himself never brought in anywhere near 125,000 in a year.

And, these numbers do not include the Special Immigrant Visas from Iraq and Afghanistan that are treated with the same benefits as refugees.

As soon as I see anything about what the President is proposing for 2021, I’ll report.

Remember, as we have said for four years, he can set the arrival number at zero!