The Conservative Tree House (The Last Refuge) has a story yesterday, hat tip: Cathy, in which they question who are all the people we flew out of Afghanistan when few were Americans and few apparently were those with Special Immigrant Visas?

State Department Admits the majority of Afghans and SIVs who helped us did not evacuate, so who are these 116,000 Afghans we evacuated?

According to the data provided by the U.S. State Department in the last few days, the total number of people evacuated from the Kabul airport was 122,000.  Of those, 6,000 were American citizens (AmCits), and 116,000 were Afghan refugees.

Today the State Department admits the “majority” of the qualified Afghan people who assisted the U.S. during operations in Afghanistan, Afghan Special Immigrant Visa (SIV) applicants, did not get evacuated.  That admission begs the question: then who the heck are those 116,000 refugees?

Well, they mostly are not legitimate refugees (yet!).  They are just more bodies the left is using to change America by changing the people.

How do I know?  Because the federal resettlement contractors*** are anxious.

If they aren’t refugees, then they are likely being paroled into the US and that means there won’t be a large pot of payola for the contractors, nor will there be gobs of taxpayer money flowing to individual Afghans (well, at least not yet!) for a panoply of welfare programs.

It also means that they don’t automatically get permission to stay, but let me ask you:  Do you think there is a chance in hell that any will ever be sent back to Afghanistan?

Keep in mind that I have been on (LOL!) sabbatical for most of the last month, so I haven’t been doing my usual extensive reading on refugee industry politics nor have I been following the contractors closely.  Therefore this is not the definitive word on what the hell is going on as Biden’s White House team wings it!

However this bulletin from the US Committee for Refugees and Immigrants explaining the program that is likely being used to move so many foreign nationals into the US so quickly is informative.

If they aren’t legit refugees it is questionable whether the contractors will be in on the action.

It appears that Congress might have to change some laws to free up welfare for a large number of Afghans (and in order for the contractors to help them because the contractors, of course, do not work for free!).

Below are screen shots of the opening paragraphs and the closing paragraph of the USCRI document (photographed because I am afraid the pdf might disappear). 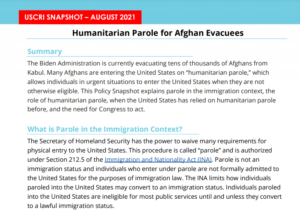 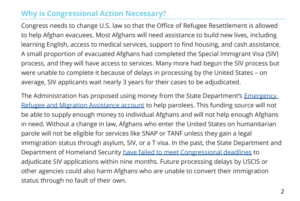 By the way, the refugee industry lobbying arm—Refugee Council USA––has created opportunities for you to get involved promoting and lobbying for the quick placement of Afghans (whoever they are!) into America.

*** These are the nine Leftwing federal resettlement contractors that are busy beavers right now as they juggle for position to be awarded their allotments of ‘refugees’ (refugee industry watchers refer to the process as bidding for bodies).