Michigan Live has done a very good job of analyzing refugee data and pointing out that Michigan is in the top five most ‘welcoming’ states in America when it comes to refugees, especially Muslims from the Middle East!

Michigan received the fourth-most refugees of any state in the last decade.

Michigan admitted 30,467 refugees from 52 countries since 2010, according to the U.S. Department of State, and more than half immigrated from Iraq. Michigan was a top destination for refugees during a spike caused by the Iraq War, and the state is expected to be a key player in the effort to resettle refugees seeking a new start after the Afghanistan War ended last month.

Texas, California and New York were the only states to bring in more refugees since 2010. Texas nearly doubled Michigan’s total with 59,878 refugees.

Michigan ranked 11th in the country for refugees per 100,000 residents. Plains states — North Dakota, South Dakota, Nebraska and Idaho — led the nation in refugees per capita.

There is much more about other states too.  This is a screenshot of an interactive map Michigan Live published. Go check it out. 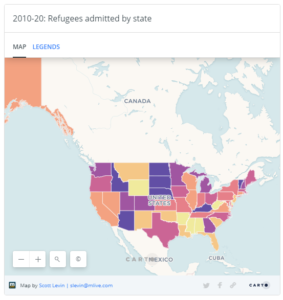 One important point the Michigan story highlights is that refugees do move from where they were originally placed by a resettlement contractor.

So once an enclave has begun to build, it will grow.   Somalis to Minnesota is a case in point.

See my many posts on Michigan by clicking here.  (And please use my search window as a starting point for your research.)

If you missed it, see a succinct summary of how Biden’s first wave of Afghan  evacuees (they are not legitimate refugees) are being categorized and where they will be placed (Nayla Rush at the Center for Immigration Studies).

Editor:  Apologies from me for not being able to keep up with everyone’s requests for information.  I am overloaded on all fronts as I try to maintain some balance in my life.  Some of you have noticed that I have deactivated my Facebook page—yes, I have.

My e-mail boxes are full and overflowing! The very best way to reach me is to send a comment to this post if there is something you want me to see.  I do review and moderate comments every day or so, and if you have sent me  some information that is off topic, I won’t post it, but will see it.