“People here have been very engaged in the election results. There has been a lot of conversations about Biden and people are very optimistic now. I don’t think he will be racist like Trump.”

Yup, they are chomping at the bit to get to Anytown, USA as soon as they can!

Muslim Somalis and Rohingya voice their enthusiasm and expectations here at Reuters:

Joe Biden’s U.S. presidential election win [not so fast!—ed] has raised hopes of resettlement for refugees from Asia to Africa, many in countries where they are denied work and education and have no formal status.

President-elect Biden is expected to try to reverse much of Trump’s immigration legacy including travel bans on 13 countries that are either majority-Muslim or African nations.

He has also said he would raise the annual ceiling for refugee admissions to 125,000, but has not indicated how quickly that would happen.

Danielle Grigsby, Refugee Council USA’s Director of Policy and Practice, said there were many reasons to be optimistic about more progressive refugee and immigration policies under the Biden-Harris government.

“There has been a lot of early signals on from the Biden-Harris team to get rid of some of the totally unnecessary hurdles that have been put in place to intentionally slow refugees from coming to the U.S.,” said Grigsby.

In Sub-Saharan Africa, home to more than one in four of the world’s 80 million refugees and displaced people, tens of thousands of people have had their applications for resettlement suspended since Trump took office in 2017.

U.N. data shows 2,636 Somali refugees have so far been resettled in the United States under the present administration against the 32,068 Somali refugees accepted under the second term of former President Barack Obama.

“People here have been very engaged in the election results. There has been a lot of conversations about Biden and people are very optimistic now. I don’t think he will be racist like Trump,” he said by phone.

Not just Somalis itching to get here, but expectations have been raised among Rohingya in Bangladesh ….

Sharifah Shakirah, a Rohingya former refugee who moved to Texas after 21 years in Malaysia, said resettlement was the best solution for the nearly a million members of her ethnic group living in Bangladesh after fleeing persecution in Myanmar.  [Bangladesh is a safe Muslim country.—ed]

“One million Rohingya in Bangladesh have no livelihood, no security, no education,” she said. “They cannot live there for another 10 years. They need a solution and resettlement is one of the solutions.”

Once again, Bangladesh is a safe Muslim country.  Just being poor isn’t sufficient to be declared a legitimate refugee under international law.

I have been following the Rohingya migration for more than a decade so if you are interested in learning more about the issue see my Rohingya Reports archive with 243 previous posts.

When the Chinese virus began spreading around the world the international press, the UN, and international NGOs used the Rohingya as an example of poor refugees that, due to their living conditions, would be ravaged by the virus. It never happened. No virus “wildfire” in the Rohingya camps or the African camps either.  Hmmmm? 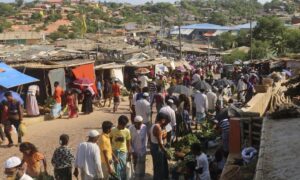 “Now that the virus has entered the world’s largest refugee settlement in Cox’s Bazar we are looking at the very real prospect that thousands of people may die from COVID-19.”

Two days ago I told you that the first cases of COVID-19 have been diagnosed at a refugee camp in Bangladesh housing tens of thousands of Rohingya Muslims.

The mainstream media has been predicting “catastrophic” carnage for weeks.

I’m going to report on the effect on the camp in the days and weeks ahead because I think it will be illustrative on the issue of social distancing.

I’m not wishing for a certain outcome, nor am I predicting what will happen.  I will just report.

When it comes to anything to do with the Rohingya, the mainstream media’s myopic view is not to be trusted. Combined with its coverage of COVID, finding facts will be a challenge.

In breathless tones I see that NPR, the Hill, Deutsche Welle, the BBC and Reuters are all jumping on the news they have been waiting for over the last two months.

Here is NPR with its dramatic headline:

It’s the moment international aid groups have been dreading for months — the coronavirus has reached the sprawling refugee camps in the Cox’s Bazar district of southern Bangladesh, home to roughly a million Rohingya refugees.

Bangladesh officials said on Thursday that at least two people living in or adjacent to the camps have tested positive for the coronavirus and have now been quarantined amid fears of a humanitarian disaster if the virus spreads unchecked.

“I am scared, I am worried, but I also feel that this is a stark reminder how vulnerable the Rohingya refugees are,” she said.

Save the Children’s health director in Bangladesh, Dr. Shamim Jahan, is worried, too. In a statement, he warned of the “catastrophic” effect of the virus on the Rohingya, and on Bangladesh in general.

“Now that the virus has entered the world’s largest refugee settlement in Cox’s Bazar we are looking at the very real prospect that thousands of people may die from COVID-19,” he said.

See my Rohingya Reports category with over 200 posts extending back a dozen years.  The Rohingya are a Muslim ethnic group that is permitted to be resettled in the US (there is no Muslim ban!).

I’m posting this news because I have been following (for weeks!) the media’s hyper focus on the Chinese Virus and its potential threat to large refugee camps worldwide.  Now it appears the first cases have arrived.

The value of social distancing (or lack of it) is about to be tested.

Over two weeks ago I told you that the carnage watch was on, see here.

In case you don’t think the Rohingya have anything to do with you, think again.

You need to know that Rohingya Muslims (there is no Muslim ban!) are being resettled in the US in large numbers (prior to the COVID shutdown) during the Trump Administration.

Here is one story about Rohingya refugees staging a political protest in Arizona a couple of years ago with a little information for you on the Rohingya back story.

See over 200 additional posts on Rohingya in my Rohingya Reports category.

Their situation is much more complicated than the superficial media-created meme that depicts them as pure as the driven snow while Burmese Buddhists are their persecutors.

These are the first confirmed cases among refugees in Cox’s Bazar, where around one million Rohingya are encamped, a government doctor said.

Officials told the BBC that those infected were now being treated in isolation.

About 1,900 other refugees are now being isolated for tests.

The Rohingya in the crowded camps of Cox’s Bazar have been living under lockdown since 14 March.

In Greece, which is also home to large numbers of refugees, officials are hoping to relocate around 1,600 vulnerable persons from its camps to other countries as the pandemic eases.

Two migrants who reached Greece’s Lesbos island this week tested positive for Covid-19 and were isolated with no contact with refugee camps on the island.

Go here to read about the big Greek camps.  A couple of newly arrived African migrants have tested positive for the Chinese virus, but notice that the big island camps are still largely not impacted.