Possibly getting wind of an upcoming lawsuit the Southern Poverty Law Center has apparently blinked and removed their October 2016 “Field Guide,” that included yours truly, from their website.

The Field Guide was meant to let the media know who they were supposed to shun when seeking comment on anything to do with Islam.

If you visit my post on the ‘honor’ here you will see that the link to the news no longer works.

However, as pointed out by National Review writer Jack Crowe, the pdf version is still available.  Download it now for further reference!

As I said previously, I don’t really belong in such an august group.  My real ‘sin’ is that I was getting under the skin of the Hebrew Immigrant Aid Society, one of the nine major federal refugee contractors***, and a close ally of the Southern Poverty Law Center.

On learning of the honor, I said this:

By the way, it was a study by the Hebrew Immigrant Aid Society, here in 2013, that directed the SPLC to focus on my work.  I wrote about it here.

Inclusion on the list meant that I must have really hit a nerve at HIAS.

Below is what Crowe reported yesterday at National Review (hat tip: Judy):

The Southern Poverty Law Center has removed the “Field Guide to Anti-Muslim Extremists” from their website after attorneys for Maajid Nawaz, a practicing Muslim and prominent Islamic reformer, threatened legal action over his inclusion on the list.

The report, which had been active on the SPLC’s website since it was published in December 2016, was intended to serve as a resource for journalists to identify promoters of hateful propaganda; but it included a number of liberal reformers such as Nawaz, a former Islamic extremist who has since dedicated his life to combating the hateful ideology.

“A shocking number of these extremists are seen regularly on television news programs and quoted in the pages of our leading newspapers. There, they routinely espouse a wide range of utter falsehoods, all designed to make Muslims appear as bloodthirsty terrorists or people intent on undermining American constitutional freedoms. More often than not, these claims go uncontested,” the report, which still exists in PDF form, reads.

Nawaz, who founded the anti-extremist think tank Quilliam, said during a Wednesday night appearance on the Joe Rogan Experience, a popular podcast hosted by comedian Joe Rogan, that the report was removed from the SPLC website under legal threat sometime in the last two days.

Nawaz — informed by his experience as a former member of a global terror organization and a political prisoner in Egypt — routinely criticizes the fundamentalist interpretation of Islam that gives rise to terrorism. As a result of that work, the SPLC and a coalition of partner organizations that helped create the list accused him of “savaging Islam.”

Ayaan Hirsi Ali, a Somali-born liberal feminist who fled her home country amid civil war and now works at the Hoover Institution, was also branded an “anti-Muslim extremist” by the SPLC.

Go here for more of the National Review report and to follow links.

Below is a screenshot of the SPLC case against me: 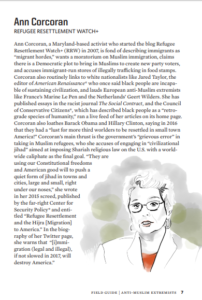 ***  I post the contractor list almost every day because I want new readers to know exactly who is responsible for driving the US Refugee Admissions Program (in addition to the UN!).  The Hebrew Immigrant Aid Society has taken the lead in political and legal activism against President Trump’s so-called Muslim ban.  I have a huge archive about them, see here.

The number in parenthesis is the percentage of the nine VOLAGs’ income paid by you (the taxpayer) to place the refugees, line them up with (low paying) jobs in food production and cleaning hotel rooms, and get them signed up for their services (welfare)!  From most recent accounting, here.