Lutheran Social Services of North Dakota, which only a few years ago built its fancy ($$$) new office building, is in financial ruin. 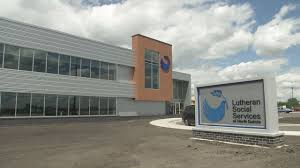 Well that is one less resettlement subcontractor of the hundreds operating around the US that are eagerly awaiting the new flood of refugees Biden and Harris are promising.

Here is the news (welcomed by those North Dakotans who have been strenuously objecting to the placement of more impoverished third worlders into their state).

Lutheran Social Services of North Dakota to close its doors; 283 jobs will be affected

FARGO — Lutheran Social Services of North Dakota CEO and President Bob Otterson told employees in a company-wide video meeting Friday, Jan. 15, that the 102-year-old agency will be closing its doors.

In an emotional exchange, Otterson — who has been in the position for only 45 days — told employees that, due to the heavy drain on resources caused by LSSND’s housing department, the agency could no longer survive. Otterson said the ongoing financial strain caused by the COVID-19 pandemic also compounded the agency’s financial difficulties.

Otterson said several LSSND programs will continue, including the Unaccompanied Refugee Minor program and Abound Counseling, but they will no longer be known as part of the agency.

Otterson said that as part of the agency’s controlled liquidation plan, many employees will receive notification that their jobs have ended today, but some staff will continue working for several more weeks to help transition clients to other agencies.

The scope of social services LSS offers is broad, including counseling, aid for youth and families, and affordable housing. However, in recent years, the organization is perhaps most often associated with refugee resettlement.

It’s taken criticism over the number of refugees who have come to North Dakota, in recent years in particular.

To learn more about the huge controversy over refugees in North Dakota see my archive on the state.

See LSSND’s most recent IRS Form 990 by clicking here.  Note that in an income stream in that most recent year of $18 million, over $8 million came from government grants (that of course is you, the taxpayers!).

Here is a screenshot of their income page. Be sure to scroll through to see salaries and other expenses. 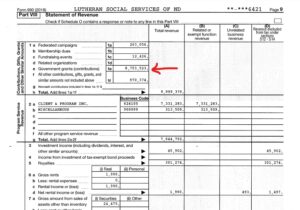 I never thought of it before, but I wonder if taxpayers in ND can ask for an audit of where all the grant money came from and where it went.

That map above locates the subcontractors and identifies who their motherships are.

For new readers here are the top nine supposed charities that put refugees before American citizens. 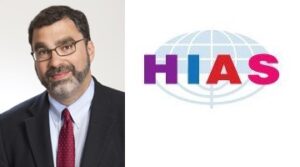 And, if you want to have some say, it means you are “unkind” and “un-American” according to Mark Hetfield CEO of the supposed non-profit group HIAS (Hebrew Immigrant Aid Society).

HIAS is one of the groups which financially benefit from the resettlement of refugees as your tax dollars fund their work of changing America by changing the people.  This is what Hetfield said last year at the time of the lower court ruling against the President.

“An overwhelming majority of governors and municipalities have already expressed their desire to continue welcoming refugees. To those few who have not, we say not only is it unkind and un-American to ban refugees from your states and towns, but it is unlawful.”

Hetfield, his organization and eight other federal contracting groups like HIAS***, have been deciding for decades where the impoverished third worlders we fly into the country will be placed and they want to keep making those decisions.  After all, you are all a bunch of boobs and racists in their minds. 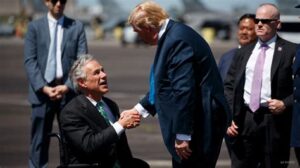 Included among those governors who did not back the President were Arizona’s Governor Doug Ducey and South Dakota’s Kristi Noem.  Only Gov. Abbott of Texas supported the President.  I believe Kemp (GA) and Desantis (FL) were silent.   (Someone correct me if I am wrong about those last two).

The recent Appeals Court decision ends any hope of consideration for your views about the placement of refugees and you will be back to only using your voice (ha! ha!) as they work to add more impoverished and potentially ill people to your towns and cities.

You really must involve yourselves in local politics!

As the incoming Biden Administration has said, they want to ‘welcome’ 125,000 refugees to America in year one to make up for what they will call the lost Trump years.

Here is CBS from Dallas-Fort Worth:

SAN DIEGO (CBSDFW.COM/AP) — An executive order by President Donald Trump had aimed to give state and local governments the ability to shut out refugees, but the 4th U.S. Circuit Court of Appeals has upheld a ban on the order.

The three-judge panel said the executive order that required both state and local entities to give their consent before allowing refugees to be placed in their areas “would cause inequitable treatment of refugees and undermine the very national consistency that the Refugee Act is designed to protect.”

Tomorrow Biden/Harris will be coronated and the entire federal government structure will turn to the job of pouring more migrants of all stripes into the American heartland, indeed into every small and medium-sized city from sea to shining sea.

Those migrants, including supposedly “vetted” refugees will need jobs or welfare that will further increase joblessness among already strained citizens in the wake of a worldwide pandemic.  They will also need healthcare as they are not tested in advance for COVID-19 and other communicable diseases.

*** For new readers these are the Progressive groups, some claim they are ‘religious’ charities, that put the wellbeing of refugees and illegal migrants ahead of struggling Americans.

Some of these federal contractors have been busy for four decades changing the demographic make-up of the United States and they are back in power!

Endnote:  I have been busy writing at my other blog Frauds and Crooks about the Great Election steal of 2020 and other issues.  I will be picking up the pace here at RRW as new readers will be arriving as Biden and Harris go into high gear, supported by the entire structure of the federal government, to change America.

I have been writing here since July 2007 (except for the brief period in 2019 when the speech police took me down) and have archived 9,577 posts (so far) on the refugee industry here and abroad.