Prior to the 2020 election steal, Biden/Harris promised they would immediately increase the refugee ceiling to admit 125,000 refugees in year one.

Indeed, increasing refugee admissions is a high priority for the Biden transition team, we are told.

Now there is a little waffling from the team, but those who stand to gain financially and otherwise from increased refugee admissions are trying to keep him focused (I expect that is a challenge considering his mental condition).

They are good propagandists as you will see when longtime refugee promotor Barbara Strack says it is vital to signal intent to drive up arrival numbers.

Here is what CNN had to say about a recent transition team powwow:

Biden team prepares to revamp the US refugee admissions program

(CNN)President Donald Trump spent years limiting the number of refugees coming to the United States. President-elect Joe Biden, meanwhile, has pledged to set the annual refugee admissions cap at 125,000. But first, his team will have to contend with the damage left behind.

The refugee cap, which dictates how many refugees may be admitted to the US, must be approved by the president [The President sets the level with the US State Department, but the President is the decider—ed].  But where the cap has often been viewed as a goal to be reached, the actual number of refugees admitted has fallen short under the Trump administration.

Correction!  The number set is a CEILING that is not to be surpassed except in a case of an emergency.  It is rarely achieved.  It was never meant to be a goal! See below that even St. Obama fell short.  They NEVER tell you that! 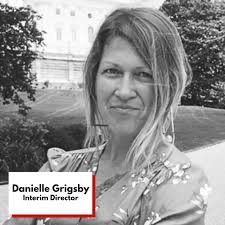 “The program that this incoming administration is inheriting is on its last breath,” said Danielle Grigsby, director of policy and practice at Refugee Council USA.

“It’s going to require both political will and an early investment in overturning policies to see the program begin to operate as it can and is intended to.”

“The infrastructure within the government, as well as the infrastructure in the NGO community, has been very badly affected by the last four years, so we’re assessing that in order to figure out how quickly the administration can move,” a transition official told reporters during a Tuesday press call. [If the infrastructure is so damaged how did those NGO CEOs’ salaries increase!—ed]

Hmmm!  A little waffling from Biden?

“It will get done and it will get done quickly. But it’s not going to be able to be done on day one, lift every restriction that exists,” Biden said.

Building up refugee admissions has been a focus between the Biden transition team and the Department of Homeland Security, which plays a role in the process, according to a source familiar with the discussions, who noted that the team is assessing what needs to be fixed to eventually hit Biden’s goal.

Asked if the Biden administration would endeavor to set that cap in fiscal year 2021, a transition official said it’s “early to say,” adding that it “depends on the state of the infrastructure, which is something we’re determining.”

It gets tiresome to have to continually demonstrate how devious these people are when they talk to the uninformed media, but I guess someone has to do it.

Note how the propagandists like to tout those Obama CEILINGS!  Well here is the reality.

Data below is from the Refugee Processing Center that, I am sorry to say, has been deleted or removed from public view so as to keep you in the dark going forward.  Lucky for me I had a screenshot of this page.

Look very closely at the Ceilings in the first column and the actual admissions in the second one.  Obama’s presidency began in 2009.  What do you see?  He never reached the Ceiling and in some years fell many thousands of refugees short of that Ceiling. 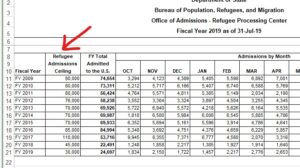 Barbara Strack, former chief of the Refugee Affairs Division at US Citizenship and Immigration Services, was involved in the push to increase the capand cautioned that rebuilding the program will take time. Even so, signaling an intent to drive up arrivals is significant, Strack argued.

“I still think it’s very worthwhile for the administration to share that goal publicly because it lets the State Department, USCIS and [the Office of Refugee Resettlement] to start building that level,” she said. “It gives everyone their marching orders on what to build toward.”

The dwindling of the refugee ceiling under Trump has also had ripple effects in the US resettlement process, particularly for agencies tasked with helping refugees get set up.

The US Catholic Bishops want a refugee czar in the White House!  Gee where have I heard this before!

Ashley Feasley, director of policy at the US Conference of Catholic Bishops, a refugee resettlement agency, said her organization is advocating that the Biden team appoint a senior-level White House coordinator ​to coordinate federal agencies and other stakeholders around rebuilding the US refugee admissions program.

So we can add Danielle, Barbara and Ashley to the list of those who put Americans last!

This is what I said to Neil Munro at Breitbart, and you should ask the same every chance you get.

For new readers these are the Progressive groups, some claim they are ‘religious’ charities, that put the wellbeing of refugees and illegal migrants ahead of struggling Americans.