I’ll begin this week with high praise for Georgia Rep. Marjorie Taylor Greene who introduced legislation in the House of Representatives that calls for a moratorium on immigration.

It will go nowhere, but she deserves much praise for doing something the Republicans rarely do—she went on the offense!

The foolish GOP chickens, time and again,  simply react to what the Dems are pushing and virtually never stake out a position that forces the Socialists to counter them.

Trump did it brilliantly and they all hated him for it. And, that is why they want to get rid of Marjorie as well!

I heard Greene interviewed by Greg Kelly on Newsmax and Kelly seemed a bit nervous when he asked her if she meant a moratorium on all immigration and she said, no, just illegal immigration.

Kelly looked relieved.  Although it is simply a guess on my part, I figure that he has swallowed this line and has been repeating it everywhere:

ILLEGAL immigration is bad, but LEGAL is good!

When I hear someone say that, usually a politician, I know that they don’t know what the hell they are talking about (or they think you are too dumb and uninformed to counter them!).

Don’t they know how screwed-up the LEGAL US Refugee Admissions Program is (I have over 9,000 posts archived here to prove it)?

Don’t they know about all the LEGAL temporary refugees who stay here for decades under the ridiculously named Temporary Protected Status label? 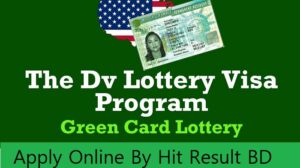 Or, what about the LEGAL Diversity Visa Lottery (aka Green Card Lottery) where 50,000 migrants a year are admitted to the US after winning a lottery—a program that exists thanks to the now deceased Senator Ted Kennedy who created it because he claimed we don’t have enough diversity in the US.

And, that brings me to the news that you are all hearing, every day and all day, that the US border is being overrun by child refugees.

First, the “children” are mostly teenaged boys as I reported here recently.

Secondly, readers need to understand that these “children” are NOT refugees.

Supposedly they plan to ask for asylum which if granted would make them refugees and give them all the rights of refugees we select and bring to America through the US Refugee Admissions Program (USRAP). However they are not refugees when they arrive.  They are illegal aliens.

Finally, most will never even fit the definition of a legitimate refugee who must prove that he or she is being persecuted, has left their country, and cannot safely return to his/her home country.  The UACs are largely economic migrants.

Seeking a better life and/or running from crime are not legal grounds for refugee status.

I think the Open Borders agitators knew that by pushing legislation two decades ago that put the (mostly) teens’ care under the umbrella of the Office of Refugee Resettlement it would (further) muddy media understanding and cement in the public mind that they are refugees.  They are not!

And, as you know, they are eventually coming to a town near you with the help of at least a couple of the nine refugee resettlement contractors.***

Two contractors that are paid to take care of the kids are the US Conference of Catholic Bishops and Lutheran Immigration and Refugee Service.

From the Office of Refugee Resettlement:

View the number of unaccompanied children released to sponsors by state and by county.

The Hill reported yesterday that apparently, since Biden’s inauguration in January, the US border has been breached by 15,000 UACs:

Number of migrant children in US custody passed 15,000: report

Records reviewed by the network showed that the government has about 15,500 unaccompanied migrant minors in U.S. custody. Over 5,000 unaccompanied minors are currently held in a tent holding facility run by Customs and Border Protection (CBP) and other stations along the U.S.-Mexico Border as of Saturday morning.

And to put that in prospective here is data at the Office of Refugee Resettlement on past years.  See that in the entire FY20, that UACs were at 15,000.

However, there were many Trump years that saw very large numbers of mostly teenaged youths entering the US.

And, btw, I have finally begun hearing commentators on Newsmax say that the “children” are mostly teenagers.  It is about time! 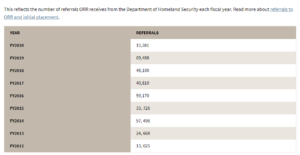 Moving on to other refugee news….

It is a great mystery that as of a couple of days ago there was still no news about Biden signing a Presidential determination to admit 62,500 refugees into the US before September 30th.

As I reported in the first week of March round-up, refugee plane tickets are being cancelled and the so-called banned Muslim refugees have not begun entering the US.

It is interesting to note that the cabal at the Refugee Council USA, the Washington, DC based lobbying arm of the refugee industry, is silent about Biden’s (their man!) failure to sign the determination.

Biden is however, getting some negative media attention for his failure to agree to the 62,500 admissions proposal his State Department has already put forth.  See this headline:

Biden wants credit for reversing Trump’s refugee policies. So why has he left them in place?

In more round-up news LGBTQ refugees are in need of mentoring.

Vermont is looking for more refugees and so is Arkansas.

***  I wrote about one of the nine federal refugee contractors yesterday at Frauds and Crooks:

Refugee Agency Settles Fraud Case with US Department of Justice

In case you are new to RRW, here are all of the contractors.  They worked to ‘elect’ Biden and as taxpayers you pay them millions annually to change America by changing the people.  Americans Last! is their motto!