In their usual knee-jerk response, Lutheran Immigration and Refugee Service came right out of the box on Monday (before anything is even on paper) to blast the President over a reportedly non-existent ban on immigration to America during the Chinese virus crisis.

Never mind that the President’s draft plan is pablum (see my comments at Frauds and Crooks earlier).  You would think by now the President should know that walking down the middle on an issue of great importance—in my view the most important issue for the future of America—he would understand that the middle of the road means you are road kill (targeted for death from both sides).

He is getting it from the Right and from the Left on the immigration ban issue.

Here are the Lutherans, from Relevant:

[By the way, if you think this group is financially suffering during the Trump years, you are wrong. The ‘religious’ charity which is 85-90% federally funded is doing just fine.  See here. It is insane that you pay their salaries as they denigrate the President and us!]

One group pushing back is the Lutheran Immigration and Refugee Service, which called on the White House to continue to welcome asylum seekers and refugees during the pandemic. “America has always been able to respond to crises while upholding its obligations to the most vulnerable refugees and asylum seekers,” wrote LIRS President Krish O’Mara Vignarajah. “How can we shut our borders at the same time as our leaders openly encourage protests and the reopening of businesses like gyms and bowling alleys? To imply that immigrants are a threat to the vibrance and prosperity of America’s workforce is a xenophobic talking point — proven false time and time again.”

Ho hum, what else would you expect. Free speech, right!

She can blast the Prez all she wants on her private dime. The maddening thing is that you, the taxpayers of America, pay her salary. Three years ago Trump should have figured out how to shut down their funding.

By the way, I expect some of you are reading this now and saying—well who the heck are you going to vote for other than Trump?

Of course there is no question I still support the President, but Trump and all politicians need to know that in order to have an energized base they need to take strong positions—no one is going to go out and knock themselves out campaigning for middle-of-the-roaders. 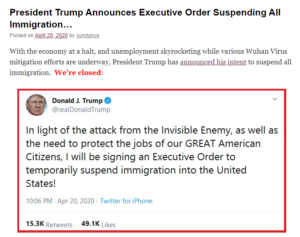 Are we just bringing in more people every day who will be unemployed for the foreseeable future, sure looks like it.

Supposedly the UN is stopping the flow of refugees worldwide (the UN controls the spigot), but so far we are still ‘welcoming’ more impoverished people to America even in the last few days.

See my latest on the numbers here:

UN Says the Refugee Flow has Stopped, Yet US Admits 182 Since Monday!

Laura Ingraham: Halt All Immigration to U.S. During Coronavirus Crisis

On Wednesday, State Department officials confirmed to Breitbart News that the refugee resettlement program — which has resettled nearly 2,500 refugees in the last six weeks — would be suspended until at least April 7.

Likewise, a State Department official told Reuters that most visa services through the United States Citizenship and Immigration Services (USCIS) agency would be suspended until further notice, though federal immigration officials have yet to clarify which visa programs will continue to bring foreign nationals to the U.S.

Ingraham suggested in a post online that the Trump administration should implement an immigration moratorium while trying to stop the coronavirus outbreak and as millions of Americans are forced to stay home from work. Many of those workers rely on hourly minimum wages and tips.

“All immigration to the US should be halted due to this national emergency — we sure as heck don’t need any foreign workers with millions of Americans on verge of losing their jobs,” Ingraham wrote, along with “#AmericaFirst.”