That is the response to Texas Governor Greg Abbott’s suggestion on Fox News earlier this week that groups like Lutheran Immigration and Refugee Service focus their ‘Christian’ charity on vulnerable Texans.

Abbott is the only governor who has said his state needs a break from the massive influx of illegal aliens, asylum seekers and refugees the state has received (like it or not!) for a decade or more.

He suggests that the ‘non-profit’ groups that are pushing refugee resettlement reprioritize and take care of Texans first, especially the homeless, because he says he does not want Texas to be California.

Lutheran Immigration and Refugee Service‘s new CEO, former Michelle Obama staffer, shot back in a story at the Texas Tribune on Wednesday:

Gov. Greg Abbott dug his heels in Tuesday in a TV interview explaining why Texas will be the only state in the nation to reject refugees seeking resettlement, saying that aid groups working with refugees should instead prioritize other Texans in need, including the state’s homeless population.

Krish O’Mara Vignarajah, president of the Lutheran Immigration and Refugee Service, said money for resettlement can’t be spent on homelessness or any other safety net programs.

“The federal funding that nonprofit resettlement agencies administer limits its use so it can only be spent through the U.S. Refugee Admissions Program,” she said in an email.

So how many millions are we talking about?

Let’s visit USASpending.gov and find out.

Well, this is interesting!  Lutheran Immigration and Refugee Service (LIRS) has in the last 12 months received as much as the US Conference of Catholic Bishops!

And, although the Bishops have experienced a steep reduction in their federal taxpayer provided ‘gifts’ since their top Obama year, LIRS has not!

Haven’t they been crying the blues that the President is causing them to close offices?

One reason for their steady stream of funding appears to be that the Lutherans’ budget is being propped up via $38 million from Unaccompanied Alien Children grants, while the USCCB in the same time period received $21 million for what should be more accurately labeled Unaccompanied Alien Teens.  84% of the ‘children’ crossing the border without a parent are above the age of 13.  Two thirds of the teens are males.

Yup! Ms. V is right, all of their federal funding is to take care of foreigners, many here illegally, so, silly Abbott, why on earth would the humanitarian Christians bother with Americans, with vulnerable Texans—there is no MONEY in it!

BTW, I’ve been told by a reliable source that it was the Obama Administration that made this revealing USASpending.gov resource available to us.

Now, it is always fun to have a look at a recent IRS Form 990 for these ‘religious charities.’  This is the salaries page for the most recent one I found for LIRS which is 85%-90% FEDERALLY FUNDED in any given year.

Former CEO Linda Hartke was hitting the $400,000 mark just as she was headed out the door. You were paying 85-90% of that salary and the salaries of the other six-digit employees.  I wonder if they are paying Ms. Vignarajah that much?  (We will find out when their next Form 990 is made public). 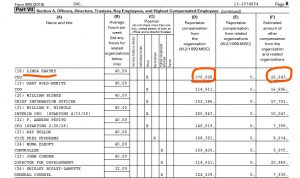 This is fun. I can’t wait to have a look at the other ‘religious charities’ which use our money to “welcome the stranger” rather than to take care of  Americans.

I sure hope good Lutherans are speaking up and making it clear that LIRS does not represent them!

Oh, and I should have mentioned that LIRS is one of the three federal contractors that filed a lawsuit and successfully halted, for now, President Trump’s first effort to reform the UN-driven Refugee Admissions Program.

4 thoughts on “Lutherans to TX Governor Abbott: We are Paid to Take Care of Foreigners NOT Americans!”