“We are thrilled with this decision.” 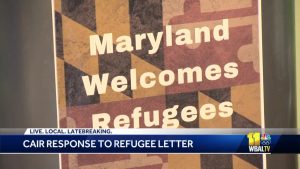 Of course they are, they have apparently been lobbying him heavily. Just as you can be sure they were busy in most states making sure that governors, especially Republican governors, toed the line.

I told you about Hogan’s consent yesterday, here.  I guess it shouldn’t have been a surprise because he has always been a ‘never Trumper’ so supporting the President on reform of the UN-driven Refugee Admissions Program wasn’t at the top of his priority list.

So far I am not seeing any Maryland county governments begging for refugees (although I can think of several ready to invite more ‘diversity’ and more poverty to their counties).

Hogan made his decision well before a Jan. 21 deadline set by the Trump administration.

In a letter to Secretary of State Mike Pompeo, Hogan wrote, “We are willing to accept refugees who the federal government has determined are properly and legally seeking refugee status and have been adequately vetted.”***

“They are a great asset to Baltimore and to Maryland,” said Ibrahim Abusway, community development of Islamic Circle of North America Relief USA.

“We are thrilled with this decision,” said Zainab Chaudry, director of CAIR Maryland outreach.

The president imposed the requirement for cities and states to make a decision as to whether or not they would accept refugees after he cut the total number of refugees the United States will accept to a historic low of 18,000.

“This is just another step that is indicative of the Trump administration’s anti-Muslim, anti-immigrant, anti-refugee agenda,” Chaudry said.

While Maryland has accepted nearly 10,000 refugees under the Hogan Administration since 2016, Hogan was among 31 governors who wanted to refuse Syrian refugees in 2015.

“In 2018, CAIR had the opportunity to actually introduce Gov. Hogan to a couple Syrian refugee families that were settled in the Baltimore area, and not only was he able to hear more about their personal story, the circumstances that led them to flee their country and civil war and strife and to settle here in the United States, but he also learned about how they were launching a small business,” Chaudry said.

Just so you know, by very large margins (even under Trump), the vast majority of Syrians entering the US are Muslims.

*** This vetting issue is a red herring!  Hogan surely knows that you can’t robustly vet anyone when they come from failed states.  The vetting in many cases involves nothing more than asking the refugee if he/she has associated with any terrorist groups.  What do you think they will say!  Lying to infidels is permitted in the Islamic ‘faith.’

And, besides, the State Department’s Funding Guidance expressly says a governor can’t put any conditions on his/her letter.  However, Hogan did place a condition—he said they must be “legally vetted refugees” (whatever that means!).  See his letter here.

Was that so he could throw a little bone to all of you who might be concerned about who he is welcoming to Maryland?

Here is what the Funding Guidance says:

The letter may consent to initial resettlement for refugees only in certain localities within the state, but otherwise must convey the state government’s unambiguous and unconditional consent to accept the initial resettlement of any refugee in that state in FY 2020. The consent may not be conditioned on acceptance of certain refugees or on any other factor, such as refugees’ race, ethnicity, religion, or national origin.

For the umpteenth time—why are the squabbling factions in the Middle East our problem?  They have been fighting among themselves for centuries and we are then expected to take them in—why?

I know I’ll hear from Lutherans who disavow everything that Lutheran Immigration and Refugee Service (LIRS) is doing (and don’t like being lumped in with them), but indeed it is this faction (the Leftwing) of the Lutheran ‘faith’ making all the news.

When I saw this website this morning (thanks to a reader) where LIRS (one of nine federal refugee contractors that monopolize all refugee resettlement in America***) is running a tally of their successes in gaining consents for their placement of refugees, I am struck by a couple of things.

First, where the heck is the Department of State that promised a running tally would be publicly available.

As of this writing the DOS website is pathetic compared to LIRS.

Of course since LIRS is almost completely funded by the federal government (taxpayers like you and me!), funding based on the number of refugees they place, they have a lot to lose if they can’t get enough consents when applying for their contract with the State Department.

Weak Governors are falling like dominoes as we have been reporting, see here yesterday, but where are the counties?

The US State Department’s Funding Guidance (the rules for the President’s reform initiative) specifically says that in addition to governors, the contractors must get consent from COUNTY governments.  There is no mention of Mayors of cities having any say!

By the way, the contractors hate Trump’s new reform plan because they have had free rein for decades to place refugees pretty much wherever they wanted with guidance from friendly and ideologically aligned bureaucrats in the State Department.

And, they certainly never had to solicit support from elected officials to get their MONEY for the year (actually now only a portion of the year from June to the end of September 2020).

Here is the pertinent section of the Funding Guidance:

Consistent with Section 412(a) of the INA and Executive Order 13888, Enhancing State and Local Involvement in Refugee Resettlement, PRM and the Department of Health and Human Services Office of Refugee Resettlement (ORR) seek to promote the involvement of states and localities in the selection of locations for initial resettlement. In addition, PRM and ORR seek strong environments to support resettlement and speedy integration, and regard state and local consent for resettlement activity as important evidence of such strength. For each state and locality where the applicant proposes to resettle refugees during the award period, the applicant should seek written consent for resettlement of refugees from the state governor’s office and the chief executive officer of the local government (county or county equivalent). PRM will take into account such consents to the maximum extent permitted by law, including Section 412(a) of the INA and antidiscrimination laws, in deciding where to place refugees.  [A little wiggle room here at the end, but still no mention that mayors must approve.—ed]

Now go here and check out LIRS lineup of support.

Notice that only a small number of counties have submitted consents (29 out of a list of 86 local consents), see if yours is on the list!  Also, see if your mayor has said sure send us more poverty we don’t have enough of our own!

So to my readers who have been asking if it’s too late to put pressure on your county to say NO, the answer is NO IT ISN’T TOO LATE!

P.S. Your federal representatives—US Senators and Congressmen—have nothing to do with this plan so don’t waste time on them right now! It is county elected officials and a few remaining governors that matter!