If you are a news junky, surely you have seen the news today from Davos that  Trump may add to the controversial travel ban countries. Reports say that as early as Monday an announcement could be made.

You need to know that refugees from the original banned countries are not banned. There is extra scrutiny for those from Iran, Libya, North Korea, Somalia, Syria, Yemen, and Venezuela, but no outright ban.

Here is one of many stories, this one from NPR:

President Trump says he’ll widen a controversial travel ban that prohibits nearly all people from seven countries from traveling or immigrating to the U.S., calling it “a very powerful ban” that’s necessary to ensure national security. 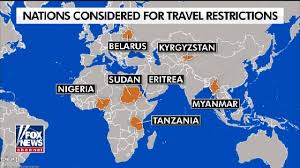 The Wall Street Journal first reported on Trump’s plan to expand the ban, citing an interview with the president in Davos. Citing unidentified sources, Politico then reported that the administration could double the scope of the ban by possibly blacklisting seven more countries: Belarus, Eritrea, Kyrgyzstan, Myanmar, Nigeria, Sudan and Tanzania.

Trump did not share any more details about the ban’s expansion, saying, “It’s going to be announced very shortly.”

However, Trump did criticize how the legal battles over past travel bans have been portrayed, emphasizing that after some losses in lower courts, the Supreme Court sided with him in 2018.

For readers who want to dig deeper, see the Migration Policy Institute‘s lengthy report on the ups and downs of the original so-called travel ban.

You will see that just as we have reported in recent months—refugees are coming in from travel restricted countries including Syria and Somalia.

(MPI is a Leftwing ‘think tank’ in Washington, DC.)

Of the possible new countries to be named, Tanzania is where many of our DR Congolese refugees are housed before being moved to your home towns.  Myanmar is home to the strict Islamic Rohingya people we have been resettling, and we take many refugees from Eritrea.

For readers of ‘Frauds and Crooks’ you know Nigeria has not been sending us their “best people.”

The rumored new travel ban is unlikely to ban any refugees, it just might slow their arrival as MPI disclosed.

Nevertheless, expect much wailing and gnashing of teeth from the nine federal refugee resettlement contractors!

“Our mission is the truth. Join us!

As a CNA reader, you know our team is committed to finding, reporting, and publishing the truth.”

Readers, please forgive me!  This is the third post in three days about the US Catholic Bishops inability to report the truth that they are paid millions of taxpayer dollars to “welcome the stranger.”

As I have said in my two previous posts (here and here), I’ll keep reporting the truth as they continue to hide it.  As a federal refugee resettlement contractor, the US Bishops ‘Christian charity’ runs on MONEY extracted involuntarily from you—taxpaying citizens.  It does not come from generous parishioners as they want you to believe.

All I am asking is that they admit that the Refugee Act of 1980 (Kennedy, Biden and Carter) set them up as the middlemen to pass along your money to ‘new Americans’ and then pretend they are benevolent Christians.

And, of course they keep a cut for their overhead and lobbying office! It’s been a sweet deal for four decades—until Donald Trump came along.

Here they are again this morning—high-fiving the judge and disparaging the President.

Washington D.C., Jan 21, 2020 / 02:01 pm (CNA).- A federal judge’s ruling has halted President Donald Trump’s executive order that allows states and localities to refuse permission for refugee resettlement. The ruling drew praise from the U.S. Conference of Catholic Bishops, which stressed the need to help refugees to safety and to maintain a uniform refugee policy.

“Today’s ruling is a welcome step in our ongoing ministry to provide refugees, who are fleeing religious persecution, war, and other dangers, with safe haven here in the United States,” said Bishop Mario Dorsonville, an auxiliary bishop of Washington who chairs the U.S. bishops’ Committee on Migration.

“Jesus Christ, who was part of a refugee family, calls us to welcome the stranger….

“We feared the negative consequences for refugees and their families as this Executive Order would have created a confusing patchwork across America of some jurisdictions where refugees are welcomed, and others where they are not,” he said.

Wouldn’t common sense tell them that knowing where refugees were welcome, or conversely not welcome, should benefit refugees they place. The most welcoming places would then be made clear to them.  But, no, they want to decide, without you ‘deplorable’ citizens having any say, where they want them placed!

Next, praise for the consenting governors:

“Once more, we see the intention to act united as a nation in the effort to provide solidarity to those who need it most and are encouraged by the compassion that this nation has towards refugees,” Dorsonville said.

Hypocrisy Alert!  They want the feds to have the final say in this case, but it is an entirely different matter when it comes to sanctuary cities they support! In the case of sanctuary cities, the cities run US immigration policy!

And, just a reminder.  Under the Refugee Act of 1980, the President can decide to admit zero refugees—watch how loudly they will be wailing if that ever happens!

And, too funny that CNA’s editor makes that comment (above) about truth at the end of this story.

Just so you know, as we reported a couple of days ago, according to USA Spending, the Bishops have lost millions of federal dollars for their ‘migration fund’ during the Trump presidency (so far).

For readers who are wondering where is the ACLU and other groups working for the separation of church and state—they ignore the billions going out to the ‘religious’ charities bringing in refugees and working for amnesty for illegal aliens because they are all on the same team.  They are all Leftwingers working toward a socialist America.

Good and faithful Catholics must speak up in your parishes!