You will see pretty much what I post here, but the big difference is that lots of followers are commenting there (not so much here I think because I have to screen comments and I’m not very timely with my approvals).

So if you are someone who wants to see what other people are saying about refugees visit Refugee Info Resource by clicking here.

There is so much breaking news on refugees I’ll try to put some stories there that I don’t write about here—just now I put up John Binder’s report today about an Iranian refugee arrested near Mar-a-Lago.

There are over 49,000 followers at my page and a lot of commenting going on!  Here are three screen shots of recent posts there:

This one from my ‘Frauds and Crooks’ blog generated 171 comments.  The Kenyan Killer, as I call him, isn’t a refugee but he is a Kenyan who shouldn’t have been here! 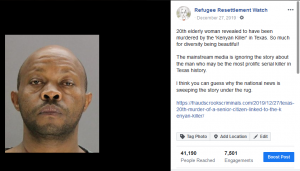 Florida has for decades been one of the top ten resettlement states in the nation, and so, just like Texas, has done more than its fair share of admitting impoverished third worlders and seeing to their (expensive) needs.

Now that Texas Governor Greg Abbott  (read that story and send thanks to the governor) says he wants to take a breather from primary resettlement, albeit for only a few months this year (from June to September), the nine federal refugee contractors*** have turned their guns on Florida Governor Ron DeSantis.

The contractors already have  notches in their belts for 19 Republican governors who foolishly jumped, long before they needed to, and begged the US State Department for more refugees from Asia, Africa and the Middle East.

When I saw this article from Miami New Times, I laughed out loud!

Look who is trying to put the screws to the governor—none other than the “ministry” as the New Times calls them—Church World Service.

It is a long story for another day, but RRW exists because of Church World Service’s “ministry.”

(emphasis below is mine)

The future of refugee resettlement in Florida hangs by a thread as Republican Gov. Ron DeSantis remains silent days before a crucial January 21 funding deadline.

Under an executive order signed in September by President Donald Trump, states and localities may choose whether to receive refugees in 2020. DeSantis is one of a shrinking number of holdouts: Only seven other states, six of them led by Republican governors, have yet to offer to accept more refugees, according to the resettlement agency Church World Service. Only one state, Texas, has declined to admit new refugees.

“Florida has historically been one of the most important states when it comes to refugee resettlement,” says Jen Smyers, policy and advocacy director for Church World Service’s immigration and refugee program. “It would be tragic for Florida to stop resettlement and would have serious implications for refugees already in the state.”

It isn’t tragic for Florida!  It is tragic for Church World Service because they stand to lose millions of dollars!

I must say we are now, after more than a decade of watching, seeing media reports about how this whole business of refugee resettlement revolves around these nine federal profiteers getting their (our!) MONEY!

A decision by DeSantis to cut off refugee resettlement would also effectively preclude Florida resettlement agencies from qualifying for large amounts of federal funding. According to Smyers, agencies such as Church World Service depend on grants tied to resettlement work to keep the lights on and to fund many key services for refugees already in the state, including cash and medical assistance, English-language classes, and job training. If those federal dollars dry up, Smyers says, Church World Service could be forced to shutter its offices in Miami-Dade, Broward, and Palm Beach Counties.

To “keep the lights on” and pay the Reverend’s annual salary of over $300,000 (twice what the governor of Florida earns), so he can be arrested from time to time?  See details of CWS income and McCullough’s compensation here.

Pay attention to this next paragraph. The lobbying pressure from the contractors is about their ability to get their MONEY in a timely manner!

However, agencies such as Church World Service have until only January 21 to submit their funding proposals to the U.S. Department of State along with any letters of consent. In that sense, no decision from DeSantis could choosing to block resettlement.

If the governor says yes, individual counties are also required to say yes to the US State Department if they want refugees.  See the Funding Guidance (the rules for the Executive Order).