I’ve already reported that our US military wants to give tickets to America to more Iraqi and Afghan ‘refugees’ as rewards for helping us in those long wars—one more reason not to go to war in Islamic terrorist-producing countries.

And, I would like to know for how many years after we’ve ended a war are we responsible for moving their nationals to our towns and cities?

Why doesn’t NBC report that information?

Here NBC characterizes this year’s battle over the annual presidential determination as one of Stephen Miller vs. America’s mighty military!

Pentagon is last holdout as Stephen Miller tries to slash number of refugees allowed in U.S.

WASHINGTON — The Pentagon is fighting against proposals by White House officials to drastically cut the number of refugees allowed into the U.S., and has called for reserving visas for Iraqis who risked their lives working for U.S. troops, according to five people familiar with the plan.

In internal discussions, the Defense Department has expressed opposition to any further reductions to the current annual ceiling of 30,000 for refugee admissions, which already is at a historic low for the 40-year-old U.S. refugee program, the sources told NBC News.

Defense officials also proposed setting aside about 6,000 slots specifically for Iraqi applicants who worked for U.S. troops as interpreters or in other jobs, according to one current U.S. official, one former U.S. official and three refugee advocates briefed on the deliberations.

The Pentagon has emerged as the lone voice in internal debates defending the traditional role of a refugee program overseen by the State Department, an unusual twist that reflects the administration’s aggressive stance on immigration and refugees.

The Pentagon’s stance is at odds with White House senior adviser Stephen Miller — the architect of the president’s sweeping crackdown on immigration — and his allies at the State Department and the Department of Homeland Security, who are all proposing deep cuts or even a halt to refugee admissions for the next fiscal year starting in October.

It is not likely to be zero as the White House floated here in July sending the refugee industrial complex into panic.

The White House, however, is weighing one option that would reduce overall refugee admissions — possibly lowering the cap to 15,000 or lower — while setting aside a certain number of openings for Iraqi applicants, similar to what the Pentagon has proposed, the sources said. [Someone must be blabbing to the media!—ed]

Keep reading and then see this: 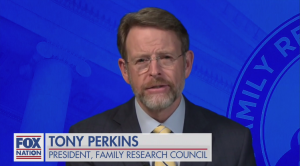 Evangelical activist Tony Perkins, president of the conservative Family Research Council and a strong supporter of President Trump, said earlier this month he was “alarmed” that the administration was considering more dramatic reductions in refugee admissions.

In a letter in July, nine evangelical leaders appealed to the administration to back up its frequent public statements on religious freedom and helping persecuted Christians abroad by raising the cap on refugee admissions.

Of course, Perkins wants more Christians, but those the military wants are mostly Muslims!

Then here, without mentioning that World Relief is one of nine federally-funded (and UN approved) refugee contractors that can’t survive without a steady flow of your tax dollars to their coffers, NBC quotes them as a representative of concerned evangelicals in America.

“The drastic decline in the number of refugees we are resettling in the U.S. is really troubling and it goes against everything that we believe about what our faith teaches us,” said Jenny Yang, vice president for advocacy and policy at World Relief, an evangelical organization that helps resettle refugees in the United States.

“It’s extremely concerning that the administration is not heeding the views of a lot of evangelicals.”

HIAS, for those new to refugee industry lingo, is the Hebrew Immigrant Aid Society  and yesterday they launched a grassroots campaign to pressure Congress into passing legislation that would abolish Trump’s so-called Muslim ban, and make it harder for any future President to keep us safe.

Nevermind that there isn’t a Muslim ban as we reported here a few days ago.

Rohingya Muslims are entering the US as refugees by the thousands, and taxpayer-funded HIAS  (about $25 million in one recent year!) and the other federally-funded refugee contractors are being paid to take care of the thousands of US-bound Special Immigrant Visa holders from Iraq and Afghanistan (mostly Muslims!)*** who supposedly helped our military (and NGOs!) in those terror-producing hotbed countries!

But, the propagandists in the Open Borders cabal never let facts get in the way of their get-Trump agenda.

They know the bill will never become law while Trump is in the White House, however they are using it as one more media stunt in advance of the 2020 presidential contest. And, they need to keep their followers/donors busy and engaged.

Here is what HIAS is telling its followers to do. (And lucky you! You can read their appeal in ten languages!)

Tell Congress to Support the NO BAN Act

On Tuesday, September 24, Congress will review H.R. 2214, the NO BAN Act. The NO BAN Act will repeal all versions of the Muslim Ban authorized through executive order over the past two years, and will amend the Immigration and Nationality Act to prohibit discrimination based on religion. Additionally, it will limit the broad executive authority that allowed the refugee and asylum bans by implementing stricter implementation requirements and greater congressional oversight.

Now, more than ever, it is critical that Members of Congress show their support against discrimination, and support this legislation.

Join us in telling Members of Congress to support the NO BAN Act.

STEP ONE: Find out who your representative is here.

Continue reading here.  They have kindly provided a script in case their followers need guidance about what to say.

Learn more about the bill here.  See that it has 170 co-sponsors (all Dems).

***A reader, who wished not to be named, told me that it was the large number of SIVs entering with the help of the contractors that were keeping the refugee ‘non-profits’ afloat during these lean Trump years.