We have admitted almost 240,000 refugees including interpreters and others who supposedly helped us in Iraq and Afghanistan since 2006 and some former military leaders say it isn’t enough and are pushing for more ‘new American’ Muslims for your neighborhoods.

It sure ticks me off!

Recently one of the nine federally-funded refugee contractors—the International Rescue Committee—crowed that former military leaders had sent a letter to the White House telling the Prez that it was imperative to bring in tens of thousands of additional refugees to help them—the military—around the world.

You might also notice that the military brass is mixing apples and oranges when discussing refugee admissions.

There are two major flows for legal ‘refugee’ admissions.

One is the original program set up by the Refugee Act of 1980 that is at present admitting around 30,000 refugees from places like the DR Congo, Burma, the Ukraine and some other African countries.  Our military isn’t actively engaged in those places.  That is the program approaching a critical decision point in the coming days and weeks.

Then there is the newer Special Immigrant Visa Program that admits the supposed military helpers from Iraq and Afghanistan.  It seems that those are the primary places of concern to top brass who have made promises of a ticket to America in exchange for their help.

The numbers of Afghan and Iraqi SIVs are separate from the Refugee Act of 1980 refugees.

[An aside: I argue that if you bring every last Iraqi and Afghan supporter of America to live in the US, what have you left in those countries—only those that hate us!]

Before I even get to the news—An important meeting is scheduled at the White House on Tuesday to discuss setting the cap for refugee admissions in FY2020—ponder these numbers.

Total interpreters for the two hotbed Islamic countries was 76,879!

Really! That many were doing translation services for us? Or did anyone who took out the trash qualify to become your new neighbor?

Isn’t that enough?  And, how many of the military brass who are shilling for the refugee contractors (like moneybags Miliband) are inviting Afghans and Iraqis to their homes, or to their neighborhoods?

Sorry this is getting long, but here is the story you need to read.  From the New York Times (hat tip: Joanne):

WASHINGTON — The White House is considering a plan that would effectively bar refugees from most parts of the world from resettling in the United States by cutting back the decades-old program that admits tens of thousands of people each year who are fleeing war, persecution and famine, according to current and former administration officials.

In meetings over the past several weeks, one top administration official has proposed zeroing out the program altogether, while leaving the president with the ability to admit refugees in an emergency.

Another option that top officials are weighing would cut refugee admissions by half or more, to 10,000 to 15,000 people, but reserve most of those spots for refugees from a few handpicked countries or groups with special status, such as Iraqis and Afghans who work alongside American troops, diplomats and intelligence operatives abroad.

Both options would all but end the United States’ status as a leader in accepting refugees from around the world.

The issue is expected to come to a head on Tuesday, when the White House plans to convene a high-level meeting in the Situation Room to discuss at what number Mr. Trump should set the annual, presidentially determined ceiling on refugee admissions for the coming year.

Advocates of the nearly 40-year-old refugee program inside and outside the administration fear that approach would effectively starve the program, making it impossible to resettle even those narrow populations. The advocacy groups say the fate of the program increasingly hinges on an unlikely figure: Mark T. Esper, the secretary of defense.

Barely two months into his job as Pentagon chief, Mr. Esper, a former lobbyist and defense contracting executive, is the newest voice at the table in the annual debate over how many refugees to admit. But while Mr. Esper’s predecessor, Jim Mattis, had taken up the refugee cause with an almost missionary zeal, repeatedly declining to embrace large cuts because of the potential effect he said they would have on American military interests around the world, Mr. Esper’s position on the issue is unknown.

The senior military leadership at the Defense Department has been urgently pressing Mr. Esper to follow his predecessor’s example and be an advocate for the refugee program, according to people familiar with the conversations in the Pentagon.

A senior Defense Department official said that Mr. Esper had not decided what his recommendation would be for the refugee program this year. As a result, an intense effort is underway by a powerful group of retired generals and humanitarian aid groups to persuade Mr. Esper to pick up where Mr. Mattis left off.

Reducing the numbers in not enough!

A reminder to all! Even if the number of refugees drops to nearly zero (it won’t!), the program will still be in place for a future President to simply put it on steroids to make up for what they will call the “lost Trump years.”

There must be a complete overhaul of the program while Trump is in the White House!

*** I hadn’t checked British national David Miliband’s salary for awhile so imagine my shock to see this from the most recent Form 990 for the IRC.

The IRC received over $500 MILLION from the US Treasury (from you!) in this one year!

Look at these salaries! 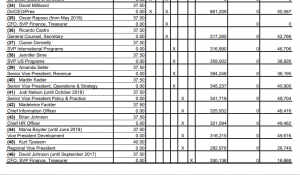 You should contact the White House over this weekend and on Monday and tell the President what you think he should do!