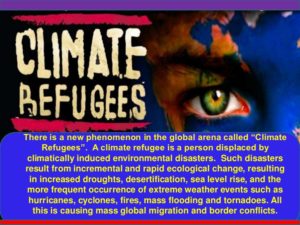 You are getting old says George Washington University grad student Rosemary Dent so the US must get ready for the climate refugee migration which will supply America with a whole younger generation of (diverse!) workers to help pay for us geezers.

Don’t say I didn’t warn you!

I’ve been warning for years that the Leftwing media has been busy dropping information like rabbit turds about how the US (and the western world) has a whole new migration crisis brewing from those on the move due to changes in the weather.

The ‘droppings’ approach is how they do it. Day after day, year after year, they drop their nuggets of propaganda until one day whatever it was they were promoting becomes common knowledge.

COVID-19 shows how unprepared the US is for waves of migrants arriving on our shores, says Ms. Dent.

From International Policy Digest (a publication based in Richmond, VA):

Preparing for the Impacts of Climate Migration

As the impacts of climate change become more severe and widespread, the United States must prepare for the resulting surge of human migration. Climate scientists are currently predicting that both primary and secondary impacts of climate change will collectively produce 140–200 million climate refugees by 2050. This sharp increase, if mismanaged, would likely overwhelm refugee processing systems, flood points of entry to the United States and strain both society and the economy.

In order to protect the United States from these potential shocks, the government must begin to prepare the appropriate infrastructure, processes, and funding for integrating climate refugees into the population. As the coronavirus ravages the country, it is highlighting many of the systemic failures that occur when the government is not adequately prepared or pro-active.

In 1990, the International Panel on Climate Change (IPCC) recognized human migration as the biggest impact of climate change. The IPCC predicted that primary impacts like shoreline erosion, coastal flooding, and agricultural disruptions would create massive disruptions to the livelihoods of millions. The resulting secondary impacts relate to the effects on society globally; such as political unrest, food insecurity, and mass migrations. As four out of five refugees flee on foot to nations bordering their home country, most human migration is localized to areas affected by conflict. However, as climate change affects communities globally, the flows of refugees will no longer be concentrated to conflict zones and their surrounding nations, bringing the issue to U.S. borders. The sheer scale of migration that the IPCC is predicting renders any previous methods of dealing with refugees unsuitable for this impending crisis.

In terms of physical processing capacity, the United States is currently severely unprepared.

The author goes on to tell us why we are unprepared and it has to do with Trump, of course.

Here is a prime example of the ‘droppings’ they repeat with no evidence.  It is just true because they believe it to be true!

In view of the abundant challenges ahead for the United States, as highlighted by the current pandemic, uniting communities and reinforcing the economy to maintain employment levels will be key to survival. As a global leader in developing methods for climate change adaptation, the United States must be prepared to take these first steps.

While we are fixated on the Coronavirus mess, don’t forget that good ol’ Uncle Joe will be expanding the refugee admissions program if the Dems regain control of the White House.

Although he didn’t jump on the ‘climate refugee’ bandwagon during the primary campaign as some other candidates did, you can be sure he will be open to it as one more excuse to expand the Democrat voter base with migrants, any migrants.

Emphasis below is mine:

Increase the number of refugees we welcome into the country. With more than 70 million displaced people in the world today, this is a moment that demands American leadership. Offering hope and safe haven to refugees is part of who we are as a country. As a senator, Joe Biden co-sponsored the legislation creating our refugee program, which Trump has steadily decimated. His Administration has reduced the refugee resettlement ceiling to its lowest levels in decades and slammed the door on thousands of individuals suffering persecution, many of whom face threats of violence or even death in their home countries. We cannot mobilize other countries to meet their humanitarian obligations if we are not ourselves upholding our cherished democratic values and firmly rejecting Trump’s nativist rhetoric and actions. Biden embraces the core values that have made us who we are and will prioritize restoring refugee admissions in line with our historic practice under both Democratic and Republican Administrations. He will set the annual global refugee admissions cap to 125,000, and seek to raise it over time commensurate with our responsibility, our values, and the unprecedented global need.