I’ve been noticing the absence of the US Committee for Refugees and Immigrants (USCRI), one of the top nine federal contractors***, in all the anti-Trump media hubbub and wondered if they were shrinking financially and therefore laying low to stay out of Trump’s line of sight.

So I checked today, and guess what?

USCRI is approximately 96% federally funded, and…..

They are doing financially better under the Trump Administration than they ever did in the Obama years.

But, before I give you the data, let me tell you how much controversy they stirred over the years.

Longtime readers may remember the huge controversy in Twin Falls, Idaho that I wrote about extensively for months that involved USCRI’s subcontractor there.  It revolved around Chobani Yogurt’s hunger for refugee labor and came to a media explosion over the sexual abuse of a child by refugee boys.

Then there was USCRI’s effort to open a new office in Rutland, VT that ended in failure when citizens rose up, protested, and threw out the ‘welcoming’ mayor.

Earlier I reported on the mess USCRI was embroiled in in Bowling Green, KY when Burmese refugees were placed in substandard housing.

(Here I am going to urge readers to use the search window top right at RRW and enter key words to find out more about Twin Falls, Rutland, Bowling Green, Lavinia Limon, Eskinder Negash etc. and save me some work putting in a zillion links!)

One point on the issue of subcontractors:

Someone knowledgeable about the big nine recently mentioned that local agencies don’t have the same name sometimes as their parent organization.  Exactly right! Whether they do that on purpose I don’t know, but for those of you wanting to better understand how secretive this program is, that is one important piece of evidence.

They have been wailing and moaning about having to close offices in the Trump era, apparently Trump isn’t hurting USCRI.

Also, USCRI is notable as a prime example of the revolving door between government contractors and the agencies from which the organization gets most of its funding.

Both USCRI’s previous CEO Lavinia Limon (headed Clinton’s Office of Refugee Resettlement) and its present CEO Eskinder Negash (headed Obama’s ORR) revolved in and out of government.  Both have done very well themselves in the process as you will see below.

First, here is the stunning financial information at USA Spending.  (I told readers how to use the invaluable site in Knowledge is Power V.) 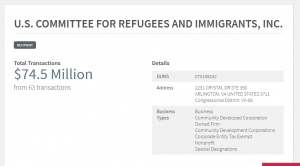 Looking at the most recently available IRS Form 990, we can say that USCRI is 96% federally funded—that is funded by you, the US taxpayer!

That means they are acting like a government agency but without any of the checks and balances of a federal agency. For example you can’t use the Freedom of Information Act to get information out of a ‘non-profit.’

Check out the 6-figure salaries you pay!  Some are higher than US Senators or Supreme Court Justices!

See all of my Knowledge is Power series.

*** Here are the nine major federal refugee contractors.  I’ve analyzed five so far including USCRI today and only the US Conference of Catholic Bishops has taken a serious budgetary hit under the Trump Administration.  Congress and the Deep staters are making sure these fake non-profits are staying in the black.

So far only the US Conference of Catholic Bishops has seen a significant decline in its federal funding.  In fact the three who recently sued to stop the Trump refugee reform effort—Church World Service, Lutheran Immigration and Refugee Service and HIAS—are doing very well.  Now we know that USCRI is doing exceedingly well.

I will work on the remaining four in the coming days and weeks.

3 thoughts on “USCRI Who? This Refugee Resettlement Agency is Laying Low, and Doing Well”