And, the most maddening thing about it?  They are working to assure illegal aliens are not deported.

Yesterday, I told you that the International Rescue Committee is diversifying its business model and is soliciting grants to set up legal offices to help illegal aliens fight deportation.

As I have been saying the Refugee Resettlement Contractors are now full service Open Borders organizations that you fund with your tax dollars!

So I figured it was time to see how the big kahuna of the US refugee industry, the International Rescue Committee was doing under the Trump administration especially since they are among the chief wailers and moaners about the low refugee admission numbers that they say has led to a need to close some of their subcontractor offices and let some low level staffers go (hint! It looks like the big honchos are still in a job).

Using data from USASpending.gov I’ve now had a look at five of the nine federal resettlement contractors.  The IRC will be number six.

So far only the US Conference of Catholic Bishops has seen a significant decline in its federal funding.  In fact the three who recently sued to stop the Trump refugee reform effort—Church World Service, Lutheran Immigration and Refugee Service and HIAS—are doing very well.  USCRI (US Committee for Refugees and Immigrants) is financially fine as well.  So I don’t know what all the crying is about!

First here is how the IRC is doing at USA Spending.

They sure jumped on the federal gravy train in the last couple years of the Obama Administration and are still riding it for all it is worth! 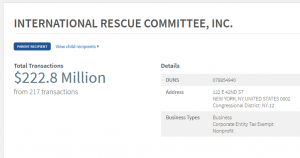 Next I went over to Charity Navigator where they always provide these handy little pie charts to tell us what percentage of their income you contributed (involuntarily) via the US Treasury—a hefty 60%!

But, wait, notice they say over $422 million is government boodle. 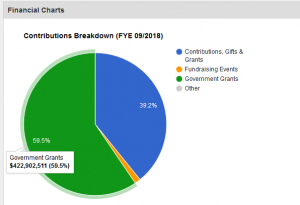 Okay, so thought I might solve the mysterious discrepancy by visiting their annual reports.

And, too funny, see who is co-chairman of the board!

Yikes, now Geithner’s annual report shows $544 million from grants and contracts for the same year. That would be taxpayer funding.

Surely their IRS Form 990 would help us!

Here is page nine of the Form 990 for the same recent year:

And, definitely these numbers do not match USA Spending numbers.  I’m guessing that the IRC is getting funding from other governments around the world other than ours.

Alas, there is no taxpayer group working for us that might have the skill to unravel all of this!

However, here is one thing that is not a mystery—doing ‘charitable’ good works is lucrative business as I said in a post at ‘Frauds and Crooks’ this week: Tell your kids to grow up to be non-profit execs!

Just have a look at the salaries at the top of the International Rescue Committee!

Warning!  Don’t look if you have high blood pressure or a heart condition!

That is largely your money!  See page ten!  Over $300 million for salaries and benefits! And, travel alone was $40 million! Does Miliband travel first class (or private jet!)?

And, now they are making sure illegals scheduled for deportation in Dallas (where else?) have a lawyer.

I wonder, if one of those illegals they defend commits a crime, could the IRC fat cats be sued?  Hmmm!