I guess I have Bernie Sanders on my mind today (see my previous post)!

Presidential candidate Sanders says if he gives Trump the boot from the White House he will ‘welcome’ 50,000 so-called ‘climate refugees’ to America each year in addition to likely a hundred thousand regular refugees.

When I say “regular refugees” I mean those people who say they would be persecuted for one of several reasons (politically, racially, etc) if returned to their home countries.

However, Open Borders Inc. has a whole new group that they call climate refugees who are moving from one place to another due to changes in the weather and they now want to expand the refugee definition to move those migrating third worlders to the west. 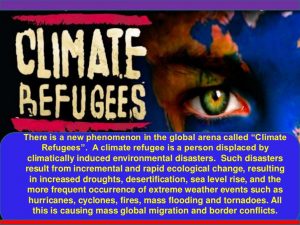 Somehow America is responsible for them too!

Here Bill Frelick at Human Rights Watch penned an opinion piece that I see was only picked up by Aljazeera in which he argues it is time to come up with a new definition of the word refugee.  What he means is expand the historic definition in order to guilt-trip the west into taking in even more of the world’s impoverished and low skilled people to facilitate the Cloward-Piven strategy.

I’ve been writing about ‘climate refugees’ for years, but only yesterday someone told me that he had never heard of such a thing!  See my ‘Climate refugee’ category.

It is time to change the definition of refugee

Climate change is an existential threat to humanity and as such, should be included in legislation on asylum seeking.

Actually mass migration is an existential threat to America if you ask me!

Despite recent and increasing efforts by the United States and other governments to narrow their interpretations of the refugee definition and to shirk their protection responsibilities, the need to expand the grounds for asylum is becoming increasingly urgent as the consequences of climate change become more pronounced.

A desperate appeal for asylum by a family from a Pacific island may have far-reaching implications for protecting people forcibly displaced by the effects of climate change. It could cause countries around the world to reconsider their laws and policies concerning refugees.

Go to the piece and read all about the recent UN case, then this…

But Pacific islands are not alone in facing such threats. In landlocked countries like Chad, Ethiopia, South Sudan, and Zimbabwe, where populations are heavily reliant on agriculture and livestock, rising temperatures have contributed to flooding, drought, famine and disease that erode not only arable land but also the resilience of populations that have suffered armed conflict and human rights violations.

Whether environmental disasters are the direct cause of displacement or an aggravating factor in combination with violence, inequality, and poor governance, millions of people on the African continent have already been displaced internally or forced to seek refuge in neighboring countries because they consider staying at their homes a threat to their lives.

While there still may be room to argue whether life-threatening threats are imminent in particular cases, the [UN] Human Rights Committee has recognized that fundamental refugee-protection principles need to be broadened now.

This means not only that our common understanding of what it means to be a refugee needs to change, but also that the 173 countries that are party to the International Covenant on Civil and Political Rights should ensure their asylum standards and procedures are adapted to protect all who face existential threats if returned to home countries that have become unlivable.  [The US is a party to that treaty.—ed]

Open Borders, Inc. is priming the pump for the post-Trump era of their dreams because no matter how many we admit, it will never be enough as far as the Socialist Dems are concerned as they scheme to redistribute your wealth.

That is the crux of it!

As Dems turn their backs on a screwed up Iowa caucus and head to New Hampshire, Bernie Sanders, for one, is tapping into the immigrant/refugee community there for new socialist voters.

How One Campaign Is Organizing An Often-Overlooked N.H. Voting Bloc: Immigrants and Refugees

At first, the scene at the Manchester field office for the Bernie Sanders campaign looked pretty typical: Volunteers milled around after a presentation from campaign higher-ups, fielding invitations to sign up for canvassing shifts from campaign staffers armed with clipboards.

But in one corner of the room, a smaller group huddled together, listening intently to field organizer Susmik Lama, who was delivering a parallel set of instructions for the final weeks of the campaign — in Nepali.

While the pace of refugee resettlement has slowed in recent years, New Hampshire is still home to thousands of refugees and immigrants — including a large population hailing from Himalayan nations like Bhutan and Nepal.

Just so you know!

In 2006, the Bush Administration told the UN that we will take 60,000 over 5 years of the displaced ‘Bhutanese’ (really people of Nepali origin) living in UN camps in Nepal. We had no national interest in the squabble between Bhutan and Nepal, nor did we have any wars going on in that region of the world!

As of today, according to the Refugee Processing Center, we have admitted 96,174 Bhutanese people to the US since Bush said 60,000 max.

They are here now, voting the Republicans out of office whenever and wherever they can!

Refugees and immigrants can vote in U.S. elections after applying for U.S. citizenship, but engaging with these communities has — until now — been an afterthought for many local campaigns.

Suraj Budathoki, a former Bhutanese refugee who now works for the Sanders campaign, has made it his mission to change that.

“The Democratic Party thinks that votes of immigrants and refugees are sure votes for them; that’s a mistake,” he said. “They don’t tend to go to those people. They think that they’re going to come to them, vote for them. But they never go to their community and talk to them.”

For foolish Republicans it is just a matter of time!