There was a time, a decade ago, when an article like this would not have been written.

The image of a refugee resettlement agency was that of a purely humanitarian organization working with little funding solely to save the globe’s downtrodden with the help of generous volunteers.

Now they are right out in the open making it clear that they are working to help globalist companies like the big meatpackers that are changing America by changing the character of the heartland through a greedy desire for cheap migrant labor.

Let me be clear, Americans previously did work in the meat and poultry industry and would do so again if wages reflected the difficult work, but once the meat giants discovered what amounts to captive slave labor that doesn’t dare complain, can’t go home, and is willing to work for far less than Americans, there was no going back.

Here we see the US Committee for Refugees and Immigrants (USCRI) (see their finances here) shilling for Tyson Foods, for BIG MEAT!

From The Perry News:

Pay attention!  If your town is getting a Tyson Foods plant, you WILL be getting third worlders of all stripes, changing the character of your town forever!

The latest anti-immigration proclamation by U.S. President Donald Trump could directly impact the ability of Tyson Fresh Meats in Perry to hire laborers.

Trump’s Jan. 31 executive order suspends immigrant visas for nationals of Eritrea, Kyrgyzstan, Myanmar and Nigeria starting Feb. 22. It will also restrict diversity visas for citizens of Sudan and Tanzania, according to the U.S. Department of Homeland Security and U.S. State Department.

Refugees from Eritrea and Myanmar have been the most frequently hired workers at the Tyson’s Perry plant in recent years.

Alberto Olguin, human resources director at Tyson Fresh Meats, said he is unsure whether the latest immigration ban will have an effect in Perry.

“We do hire refugees,” Olguin said. “We hope this will not have any effect, but we will see. It’s hard to tell at this point. Maybe by March or April we will know more. It’s still early.”

Holy cow!  Look at these numbers!

Tyson is the largest employer of refugees in Dallas County. The company currently employs 1,368 workers at the Perry plant, and about 800 of the employees are refugees, with 400 each of Africans and Asians.

Annette Sheckler, director of communications for U.S. Committee for Refugees and Immigrants (USCRI), said the Trump administration’s immigration policies are “selectively discriminatory” because they are based on the religions and nationalities of immigrants and refugees.

“USCRI strongly opposes the administration’s alarming efforts to drastically cut immigration to the U.S.,” Sheckler said. She said Trump’s anti-immigration policy is harming employers around the country, and the latest ban will aggravate the condition.

“Definitely, it’s going to have an impact,” she said. “In many smaller communities around the country, and especially in industries like meat packing, which is kind of rough and dirty, American workers are not applying for jobs there.

It’s our new Americans, the refugees and immigrants, who are taking these jobs. Tyson’s has a huge workforce made up of Somalis, Eritreans and people from Myanmar, disproportionate to the number of people they hire.”

Heck, here USCRI’s Sheckler sounds like she is shilling for the Chamber of Commerce.

The states and localities know they need the workers, Sheckler said, but Trump’s immigration czar, Stephen Miller, has other ideas for America. 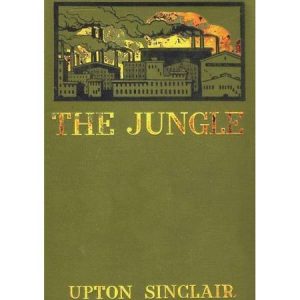 See my previous posts on meatpackers, and Tyson Foods.

Someone could write a modern day version of Upton Sinclair’s The Jungle using the dozens and dozens of posts I have archived over the years.

A starring role could go to the phony refugee racketeers!

Endnote: Another blogger recently used the phrase the “Slaughterhouse Nine” to describe the nine federal refugee resettlement contractors. I like that!