Indeed much to my shock, USA Spending reports that the Hebrew Immigrant Aid Society (HIAS) is getting more federal dollars under the Trump Administration than it did under the Obama government!

HIAS is the 4th of the nine federal contractors I’ve analyzed at USA Spending and three of the four are doing exceedingly well financially under Trump in spite of their constant wailing and moaning about how they must close offices and reduce staff.

Our often assumed connection between the number of refugees coming in and the nine contractors’ financial well-being is out the window!

So far only the US Conference of Catholic Bishops has seen a significant decline in its federal funding.  In fact the three who recently sued to stop the Trump refugee reform effort—Church World Service, Lutheran Immigration and Refugee Service and now HIAS—are doing very well.

I think that the Deep State is undermining Trump by funding his political opposition with our money!

Does the White House know?

Here is HIAS raising money off of the President’s latest effort to keep us safe with new travel restrictions (refugees are exempt!): 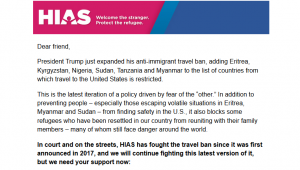 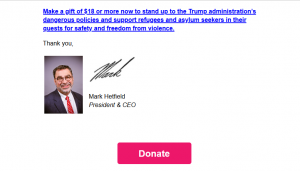 Now see that they are not hurting financially and are still receiving millions of tax dollars as they work against President Trump every day! 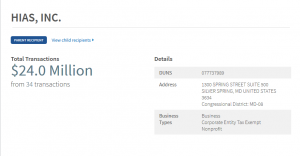