As the Trump Administration slows the flow of refugees into the US, the refugee contractors including the mack daddy of the whole bunch—the International Rescue Committee––is now going to provide lawyers for migrants who are scheduled for deportation as a way of expanding its financial base and its influence.

I’ve been telling readers for a long time that the nine refugee contractors working for the US State Department do not just place refugees and supposedly care for them, but are involved in all open borders issues, legal and illegal in the US and around the world.  This story is more proof of that!

From the Dallas Morning News:

The International Rescue Committee in Dallas, an agency that’s resettled refugees for decades in North Texas, is expanding its services to immigrants caught up in deportation proceedings.

The IRC will administer $200,000 in grants from the City of Dallas and the Vera Institute of Justice, a New York-based nonprofit, for an attorney and other staffing.

The IRC is now in “turbo mode” due to sweeping changes in national immigration, asylum and refugee policies, said Suzy Cop, the executive director of the Dallas IRC office. “There’s a huge waitlist to get legal representation. It’s great that the city finds this so important.”

The new fund is a first for Dallas and was recommended by an immigration task force advising the city’s Office of Welcoming Communities and Immigrant Affairs.

The Vera Institute has been administering such private-public programs for immigrants since 2013. It began in New York City and spread to such cities as Austin, San Antonio, Sacramento, Santa Ana and Chicago.

For years, the IRC has assisted individuals who obtain permanent residency after one year as a refugee, and then with their U.S. citizenship process. They have assisted refugees with U.S. legal status who petition for family members living abroad. It also runs anti-human trafficking programs.

The local IRC provides mental health services. It also now assists immigrants with Deferred Action for Childhood Arrivals, or DACA. And it runs an economic development program that prepares clients, refugees to immigrants, for jobs.

The IRC has steadily expanded its services beyond refugee resettlement just as the administration of President Donald Trump has scaled back refugee admissions. Refugee admissions were cut to 18,000 last September, down from a ceiling of 110,000 when President Obama left office in January of 2017.

When I called the IRC the “mack daddy” it is because they are the richest of the contractors.  I was going to analyze their USA Spending report here, but will do it in a separate post.

This is an excellent opinion piece from Maine, a state we have extensively reported on here at RRW.

The writer very logically explains that before the state willy-nilly invites even more refugees and asylum seekers who supposedly would fill the needs of businesses looking for labor, more data is needed because right now it sure looks like Maine taxpayers are picking up the slack.

We need more data on how long it takes most refugees to make enough in wages to support their families without taxpayers’ help.

As more asylum seekers arrive in Portland, members of Maine’s congressional delegation want to accelerate work permits, pointing to labor shortages and taxpayer costs. But on a closer look, good reasons exist for continuing to require applicants to wait for work permits.

I believe that the labor benefit of employing asylum applicants is exaggerated, as court denial rates for West African applicants range from 40 percent to 50 percent, which suggests that almost half of Portland’s asylum seekers will eventually be denied and become potentially deportable. And of those who achieve refugee status, there are substantial costs.

Proof that the costs of refugee resettlement are shifted to states, while supposedly some financial benefits accrue at the federal level.

An internal study rejected by the Trump administration and leaked to The New York Times, “The Fiscal Costs of the U.S. Refugee Admissions Program at the Federal, State, and Local Levels from 2005-2014,” provides important data for Maine’s representatives in Washington. The authors estimate that refugees and their dependents generated a $52.8 billion federal surplus but caused a net deficit at the state and local levels of $35.9 billion. Since the federal surplus would be shared nationwide, but the state and local deficits fall entirely on state and local governments, increasing the number of refugees in Maine would cost Maine taxpayers.

And the federal benefit? I imagine that the study’s computed federal benefit is inflated, as the impact of refugees on the high cost of national defense or federal debt was not included in this study — a surprising omission.

I suspect the enormous cost to our economy of remittances—money sent back to the home country—was never included either. 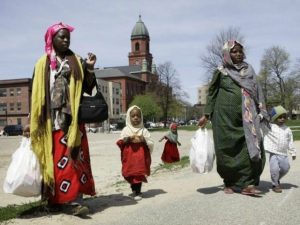 Refugee costs shouldn’t surprise us. Moving to a new country, learning the language and making enough money to support your family is difficult.

The Maine Department of Labor looked at the employment data five years after Somali immigrants arrived in Lewiston-Auburn in 2001. By 2006, only half of working-age Somalis had worked at all. Many of those jobs were seasonal and low wage.

Excellent questions that are NEVER answered:

Before providing work permits to a new population of asylees, we need more data. How long does it take most refugees to make enough in wages to support their families without taxpayer programs? Will Portland’s applicants remain when they get refugee status? Or will they move to cities with better wages and larger populations of their compatriots? Do they have the skills our employers need?

When politicians provide foreign workers to employers that don’t pay a livable wage, then taxpayers will eventually subsidize the employee with public programs. It would be better to require employers to recruit Americans. 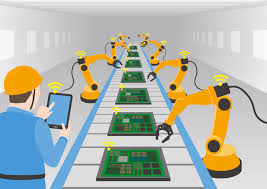 Now here comes the ticking time bomb that no one wants to talk about—what is going to happen to all of the low-skilled workers we have admitted (and continue to admit) by the millions as the automation monster rears its ugly head?

And we might ponder the future. A recent McKinsey study is projecting that automation will replace nearly half of the American workforce by 2055. Walmart already uses robots to stock shelves, and McKinsey predicts that automation will sweep the economy. Let’s slow down, and think this one through.

It includes lots of links to additional back-up information.

You might want to check out one of RRW’s top posts of all time—Maine’s welfare magnet (2009).