Although stymied by the courts at other levels, the important Tenth Amendment case involving the Constitutional challenge against the federal government’s ever increasing cost-shifting to the states for the care of refugees is still alive. 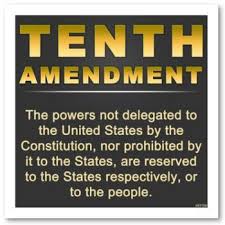 There was a time when I thought that the political process was the place to change refugee policy in America, but truthfully I am seeing little hope of any real change as Trump enters his fourth year in the White House.

Cutting the number of admissions is fine, but no real structural changes have been sought for the UN/US Refugee Admissions Program by the administration. (The governor approval process seriously backfired, and Congress is useless as members cower in fear of being called racists.)

Maybe there is still some hope that the courts will see how unfair and unconstitutional it is for states to carry a financial burden placed on them by the feds.

From the Thomas More Law Center:

Bregman observed, “The ongoing conversations between the President and state governors concerning recovery from the COVID-19 pandemic is bringing a renewed interest in federalism – the same constitutional principle of dual sovereignty which is the basis of the General Assembly’s lawsuit against federal commandeering of state dollars to fund the federal refugee resettlement program.”

The petition for certiorari, filed on March 16, 2020, objects to forcing Tennessee taxpayers to pay the costs of the resettlement: “If a state legislature cannot vindicate its rights in court when the federal government picks the state’s pocket and threatens the state if it dare stop providing funds, then federalism is a dead letter.”

The Eagle Forum, a national conservative organization with 80,000 members founded by the late legendary Phyllis Schlafly in 1972, has significantly impacted public policy at both state and national levels. The Tennessee chapter headed by Mrs. Bobbie Patray was the first state chapter to question the power of the federal government to coerce state legislators to use state revenues to fund the federal refugee resettlement program.

“Justice Scalia considered the principles of federalism, the same principles that undergird our challenge to the federal refugee resettlement program, more important to the American democracy than the Bill of Rights.

Considering the continued controversy between the Nation’s governors and the President over the best way to recover from the COVID-19 pandemic, a grant of certiorari would present the Supreme Court with an opportunity to calm the waters over their conflicting claims of power by expounding on Federalism 101.”

Continued Thompson, “Because of the significance of this issue, I’m grateful that the Eagle Forum and its Tennessee chapter were able to assist our efforts to obtain Supreme Court review.”

According to the amicus brief: “Forcing state legislators to expend state resources outside of the normal appropriations process directly interferes with their duties to the state and to their constituents. If the federal government cannot compel a state to fund federal programs, then a state should not be forced to divert funding from essential and traditional state government services in order to operationalize a federal program from which the state has withdrawn.”

Bregman notes the threat to state sovereignty powers by federally coerced spending, especially at a time when the needs of Tennessee’s citizens are dire, referring to the COVID-19 pandemic and a series of deadly tornadoes which ripped through 100 miles of Tennessee counties.

The amicus brief concludes, “There is no room in the Constitution’s framework to permit the federal government or its agencies to take state funds without the express consent of the state’s appropriating body.”