Late last week I reported that Beltrami County, MN county commissioners had taken up President Trump’s offer to opt-out of refugee resettlement for a portion of 2020.

Beltrami became the second county in the nation (that I know of) to take that action after Appomattox County, Virginia. 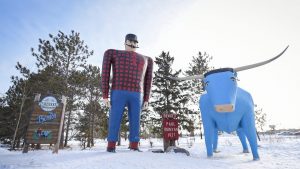 Now see what the radical Left is doing.  They have ginned up a campaign to attempt to boycott the county which depends on tourism for some of its income in hopes of scaring political leaders (and the Chamber of Commerce).

Just so you know, BIG MEAT/BIG POULTRY is the driving force for MORE refugees (to supply cheap labor) in other locations in Minnesota!

Boycotts like this are rarely successful and I suspect partly because those who support what the county has bravely declared—support for Trump’s immigration policies—will quietly respond and counteract the small number of big mouth boycotters on Twitter and add the county to their vacation plans especially when they now learn that this is Paul Bunyon land—LOL! I didn’t know that!

Minnesotans who believe their state has enough refugees and who support the President surely should get a counter campaign going!

BEMIDJI, Minn. — Almost immediately after the Tuesday vote was cast that established Beltrami County as the first governmental unit in Minnesota — and the second in the nation — to refuse refugee resettlement, a social media firestorm erupted, laden with calls to boycott the tourism-driven community.

Comments from thousands of people across the country poured in on Twitter and Facebook, with many expressing that they would no longer vacation or spend money in the northern Minnesota county because of their disapproval of the Beltrami County Board’s 3-2 vote. The option to deny consent to refugee resettlement was granted to state and local governments under an executive order by President Donald Trump.

The move will have little practical effect as no refugees have been resettled in Beltrami County in at least the past five years.

Still, the reaction online was swift.

You can read more here.

I wonder if this is happening in Appomattox County, Virginia, also a tourist destination county because it is famously the location where the South surrendered to the North to end the Civil War.  Yikes! (Just saying!)

Toughen your hides as November approaches, the Left plays very dirty. And, I think they would agree with me—immigration is the number one issue that will determine the future of America!

The contrast between President Trump and the Democrat candidates is stark on the issue. The Refugee Act of 1980 is still in place and the Dems have already said they will immediately open the gates to over 100,000–200,000 refugees on day one of a Democrat president’s term.

Tom Steyer recently pledged to open our borders to so-called climate refugees creating a whole new category of legal migrants for you (the taxpayers) to take care of!

Besides adding Paul Bunyon country to your vacation plans, the most important thing you all must do now is reelect Donald Trump.

4 thoughts on “Bludgeoning Beltrami County, How the Left Plays Mean and Dirty”