Here is the first news I am seeing about where the Trump administration is on the decision to admit refugees for FY2021 which begins on October first.

I’ve been telling you in a series of posts (tagged FY2021) about the pressure the Leftist Open Borders agitators are putting on the White House to set a ceiling of 95,000 refugees for next year—a number way above anything the Obama administration ever admitted.

WASHINGTON — U.S. officials are weighing whether to postpone or further cut refugee admissions in the coming year amid legal fights over President Donald Trump’s refugee policy and uncertainty caused by the COVID-19 pandemic, a senior official said.

The possible postponement – one of several options under discussion – would mean some or all refugee admissions could be frozen until a legal challenge to a 2019 Trump order on refugees is resolved “with some greater degree of finality,” the official told Reuters.

It is not clear when that lawsuit may be resolved, especially if the case goes all the way to the U.S. Supreme Court, a process that could take months or even longer.

The president typically sets yearly refugee levels around the beginning of each fiscal year and the Trump administration has not yet announced its plans for fiscal 2021, which begins on Oct. 1.

The refugee cap was cut to 18,000 this year, the lowest level since the modern-day program began in 1980. So far, roughly half that many refugees have been let in as increased vetting and the coronavirus pandemic have slowed arrivals.

The senior official said that even if 2021 admissions are not delayed, next year’s cap could be cut below current levels.

“The arc of this administration’s refugee policy is going to continue,” said the official, who requested anonymity to discuss the ongoing deliberations.

Trump and his top officials have said refugees could pose threats to national security and that resettlement should take place closer to countries of origin. The administration also contends that refugee resettlement can be costly for local communities, although refugee backers reject those arguments.

The possible moves remain under discussion and no final decision has been reached, the official stressed.

In addition to greatly reducing refugee admissions to the United States, Trump also issued an executive order in September 2019 that required state and local elected officials to consent to receive refugees, saying it would better ensure refugees were sent to areas with adequate resources to receive them.

Three of nine federal refugee contractors successfully sued to stop the Trump order to give state and local governments a say in refugee resettlement. They have been deciding for four decades where to place refugees and they want to continue to have that power. 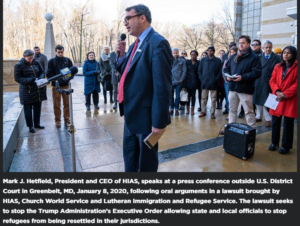 In January, a Maryland-based U.S. district judge blocked the order from taking effect, prompting Trump administration officials to consider a possible “deferral” of refugee admissions until the court case is resolved, the senior official said.

The case is now on appeal, so the administration has a very good reason to postpone making any decision about numbers.

The Refugee Act of 1980 leaves the discretion up to the President and there is no requirement in the law that says we must admit any refugees!

More here. See the discussion about how Biden wants 125,000 refugees this coming year, but that Trump has successfully severed the pipeline into America which refugee promoters say will take months (years!) to rebuild.