The other day when I posted on an opinion piece published in a Billings, Montana newspaper where the writer was attempting to tell readers that refugees were all about peace and love and a better life, a reader reminded me of this story which I wrote about several times over the years.

I had included ‘El Cajon Iraqi murders wife and pins it on whitey‘ in my terror and crime round-up, but it bears repeating especially in light of the admission by the State Department that many Iraqis entered the US fraudulently and as someone once said about another group of migrants “they aren’t very good people.”

If there could be anything worse than murdering your wife, it is blaming the murder on Americans and creating a frenzy that brought in CAIR and the Southern Poverty Law Center to scream Islamophobia and racism!

…the “hate crime” hoax had frightened Muslims in the El Cajon area into thinking there was a raving Islamophobe on the loose killing Muslims in their kitchens.  CAIR and the Southern Poverty Law Center were right in the forefront helping fan the flames.

After beating his wife to near death in 2012 (she died of her injuries a few days later), Al-Hamidi set the frenzy in motion by penning a note and claiming he found it near his injured wife. The note read:

“Go back to your own country. You’re a terrorist.”

The whole story sounded fishy from the beginning.

The queen of fake news, the New York Times, got involved and published a story with this headline and photo:

If you were following the case, you likely cannot forget this image of the weeping murderer at the funeral of his 32-year-old wife, Shaima Alawadi. 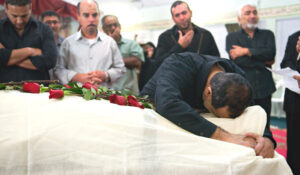 Ultimately he was exposed, went to trial and found guilty.  I doubt the NYT or any of the charlatans at CAIR and the SPLC ever apologized!

So to wrap up, go back to see what the Billings, Montana writer told gullible readers:

It’s a credit to our government that not a single one of more than 3 million refugees resettled since the Refugee Act was signed in 1980 has taken the life of a U.S. citizen in a terrorist attack.

But, I guess killing one’s refugee wife and making it look like it was a domestic terrorist attack perpetrated by a xenophobic Islamophobe doesn’t count in his mind. Welcoming more to places like Montana is what ‘good Christians’ should be doing.

P.S. Consider the fact that you, the American taxpayer paid for these Iraqis to have a “better life” and paid for law enforcement and a criminal trial, and you get to pay for his prison care and feeding for decades. Oh joy!