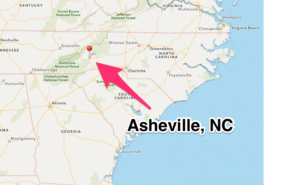 At the end of the Obama Administration (anticipating Hillary in the White House!), the federal refugee contractors were working their butts off to get more offices open in more American towns and cities so that more of you could pay for refugee care while industries (like the hotel industry or BIG Meat) could hire some cheap labor.

Your reward: experiencing the the joys of diversity!

One such target site was Asheville, NC.

The plan for Asheville fizzled due to citizen blow-back (partially led by former Republican Rep. Mark Meadows) and then Donald Trump won the White House resulting in a hiatus in the big push for new resettlement sites.

Asheville, North Carolina! You are next! Federal refugee contractor has come to town

And, the news a year later:

Well, they are back and Asheville will now become a resettlement site with an anticipated 150 annual refugee arrival rate.

From the Citizen Times:

I had to laugh because they are so clever to use an appealing and grateful couple—Eastern Europeans—as the face of their refugee propaganda media push. It is a bait and switch! Wait until they get some Africans and Middle Easterners!

In case you are wondering, a town does not get to choose its refugees!

On May 18, the Buncombe County Board of Commissioners voted unanimously to have County Manager, Avril Pinder, write a letter of support for the opening of a local Refugee Resettlement Reception and Placement sub-office. The office has no cost to the county, though some social services are offered to refugees.

That could mean an increase from an average of about 75 refugees a year to 150. And Buncombe has about 1,775 Ukrainians, according to the census, or 0.7% of the population.

The move follows a decision by President Joe Biden to increase the refugee goal, something set annually by the president.  [Biden has said he wants 125,000 refugees admitted in FY22 which begins in less than 3 months—ed]

Looks like the US Conference of Catholic Bishops snagged this one.

The IRC was after Asheville back in 2016.  The contractors are furiously searching for ‘welcoming’ sites now because they want to get their proposals in to the US State Department before September.

Nine voluntary agencies operating in the U.S.*** take portions of that target number and divide it among their affiliate offices throughout the country. Catholic Charities is an affiliate of the U.S. Conference of Catholic Bishops, which resettles about 30% of the refugees arriving yearly.

…. each refugee participates in an extensive interview and screening process before arriving in the U.S., said Susan Phillips, former interim director of refugee resettlement for the Catholic Charities Diocese of Charlotte.

“The refugees coming from Moldova, Belarus and Ukraine are eligible for resettlement through the Lautenberg Program, which was created in 1990 and later expanded to provide for the resettlement of persecuted religious minorities living in a specific list of countries, to include these three,” Phillips said.

The Lautenberg Amendment was “first enacted in 1990 to facilitate resettlement of Jews from the former Soviet Union.”

Continue reading. You will see that although the idea of a subcontractor office in Asheville was killed five years ago, refugees have nevertheless been placed there!  Refugees are permitted to be placed within 100 miles of a resettlement office.

New resettlement site shopping is happening throughout America as I predicted here when I saw this story about Winchester, VA in May.

***For new readers these are the nine major resettlement contractors who decide (with oversight by the US State Department) where refugees are to be placed in America. Your state has no say in the matter!