This Invasion of Europe story should be a wake-up call to Americans as the Biden administration gets ready to begin airlifting Afghan ‘refugees’ to the United States.

And, I suspect the administration is counting on you being so distracted by the southern border invasion you won’t notice those being flown in on the taxpayer’s dime from one of the most backward countries on earth.

Biden to Move Thousands MORE Afghans to Towns Near You

An article by Dr. Cheryl Benard at The National Interest is must-reading as we open our doors to more Afghans.

(It may look like a lot, but I have only snipped a small portion of the detailed account of Afghans creating chaos and fear in Austria. Emphasis below is mine.)

Afghans stand out among the refugees committing crimes in Austria and elsewhere. Why?

In 2014, when waves of refugees began flooding into western Europe, citizens and officials alike responded with generosity and openness. Exhausted refugees spilled out of trains and buses to be met by crowds bearing gifts of clothing and food, and holding up placards that read “Welcome Refugees.” 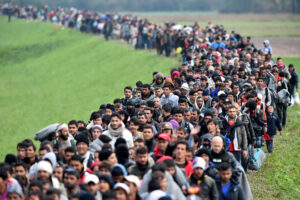 This was a honeymoon that could not last. Some of the upcoming difficulties had been anticipated: that the newcomers did not speak the local languages, might be traumatized, would probably take a long time to find their footing, and had brought their ethnic, religious and sectarian conflicts with them, causing them to get into battles with each other. All of these things happened but—as Angela Merkel promised—were manageable. “Wir schaffen das.”

But there was one development that had not been expected, and was not tolerable: the large and growing incidence of sexual assaults committed by refugees against local women. These were not of the cultural-misunderstanding-date-rape sort, but were vicious, no-preamble attacks on random girls and women, often committed by gangs or packs of young men.

At first, the incidents were downplayed or hushed up—no one wanted to provide the right wing with fodder for nationalist agitation, and the hope was that these were isolated instances caused by a small problem group of outliers. As the incidents increased, and because many of them took place in public or because the public became involved either in stopping the attack or in aiding the victim afterwards, and because the courts began issuing sentences as the cases came to trial, the matter could no longer be swept under the carpet of political correctness. And with the official acknowledgment and public reporting, a weird and puzzling footnote emerged. Most of the assaults were being committed by refugees of one particular nationality: by Afghans.

This is not an article that has been fun for me to write. I have worked on issues related to refugees for much of my professional life, from the Pakistani camps during the Soviet occupation of Afghanistan to Yemen, Sudan, Thailand, Ethiopia, Djibouti, Lebanon, Bosnia, Nicaragua and Iraq, and have deep sympathy for their plight. But nowhere had I encountered a phenomenon like this one. I had seen refugees trapped in circumstances that made them vulnerable to rape, by camp guards or soldiers. But for refugees to become perpetrators of this crime in the place that had given them asylum? That was something new.

A few weeks ago, the Austrian city of Tulln declared a full stop to any further refugee admissions. As the mayor made clear, that decision was aimed at Afghans, but for legal and administrative reasons it could only be promulgated in a global way. That had not been the city’s intention—to the contrary, it had just completed the construction of an expensive, brand-new facility for incoming asylum seekers, which would now, the mayor declared, be given over to another purpose. His exact words: “We’ve had it.” The tipping point, after a series of disturbing incidents all emanating from Afghans, was the brutal gang rape of a fifteen-year-old girl, snatched from the street on her way home, dragged away and serially abused by Afghan refugees.

It took a while for the pattern to be recognized because, until recently, western European media deliberately refrained from identifying an assailant’s refugee or asylum status, or his country of origin. [Sounds familiar—ed]  Only when the correlation became so dramatic that it was itself newsworthy did this policy change. At that point, it became clear that the authorities had known about, and for political reasons had deliberately covered up, large-scale incidences of sexual assault by migrants. For example, a gang of fifty Afghans who terrorized women in the neighborhood of the Linz train station had been brushed off by a government official with the remark that this was an unfortunate consequence of bad weather, and that once summer came the young men would disperse into the public parks and no longer move in such a large, menacing pack. The public was not amused.

I could write the same report about Sweden, Germany, or any other country of asylum in Europe, but I am focusing on examples from Austria because that’s the European country I come from and know best. So let’s take a look at the Austrian press. This from Österreich, the daily newspaper distributed for free on public transit and thus read, basically, by almost everyone. Front page: Afghan (eighteen) attacks young woman at Danube Festival. “Once again there has been an attempted rape by an Afghan. A twenty-one-year-old Slovak tourist was mobbed and groped by a group of men. She managed to get away, but was pursued by one of them, an Afghan asylum seeker who caught her and dragged her into the bushes. Nearby plainclothes policemen noticed the struggle and intervened to prevent the rape at the last moment.” Page ten: “A twenty-five-year-old Afghan attempted to rape a young woman who was sitting in the sun in the park. Four courageous passersby dragged the man off the victim and held him until the police arrived.” Page twelve: “Two Afghans have been sentenced for attempting to rape a woman on a train in Graz. The men, who live in an asylum seekers’ residence, first insulted the young woman with obscene verbal remarks before attacking her. When she screamed for help, passengers from other parts of the train rushed to her aid.”

This brings us to a third, more compelling and quite disturbing theory—the one that my Afghan friend, the court translator, puts forward. On the basis of his hundreds of interactions with these young men in his professional capacity over the past several years, he believes to have discovered that they are motivated by a deep and abiding contempt for Western civilization. To them, Europeans are the enemy, and their women are legitimate spoils, as are all the other things one can take from them: housing, money, passports. Their laws don’t matter, their culture is uninteresting and, ultimately, their civilization is going to fall anyway to the horde of which one is the spearhead. No need to assimilate, or work hard, or try to build a decent life here for yourself—these Europeans are too soft to seriously punish you for a transgression, and their days are numbered.

And it’s not just the sex crimes, my friend notes. Those may agitate public sentiment the most, but the deliberate, insidious abuse of the welfare system is just as consequential. Afghan refugees, he says, have a particular proclivity to play the system: to lie about their age, to lie about their circumstances, to pretend to be younger, to be handicapped, to belong to an ethnic minority when even the tired eye of an Austrian judge can distinguish the delicate features of a Hazara from those of a Pashtun.

Well this isn’t going to happen! Rigorous vetting by the Biden administration to weed out the degenerate young males!

…the relevance to U.S. refugee policy is sadly obvious. It will require rigorous vetting indeed to weed out such deeply disturbed, degenerate young males whose willingness to be deceptive is so pronounced and whose motives are so irrational.

Which brings me to a final theory being vented in Austria: that these destructive, crazed young men are being intentionally infiltrated into western Europe to wreak havoc: to take away the freedom and security of women; change patterns of behavior; deepen the rifts between liberals, who continue to defend and find excuses, and a right wing that calls for harsh measures and violent responses; to inflict high costs and aggravation on courts and judicial systems and generally make a mess of things.

They don’t need a “deliberate plan,” their religion is the plan! And, they know the great replacement is underway!

For the record, I am not convinced that there is a deliberate plan behind this, but I do agree that angry and unstable young men are susceptible to destructive paths. Those paths can lead to ideological extremism and terrorism, or to the formation of gangs and packs that attack, harm and destroy. As we have seen, presently many of their attacks are inept and easily blocked by random civilian passersby. But they will get more skillful over time, and Europe had best develop a defense against them.

The Left has to do some “hard thinking!”  Good luck with that!

Finally, the Left has to do a bit of hard thinking. It’s fine to be warm, fuzzy and sentimental about strangers arriving on your shores, but let’s also spare some warm, fuzzy and sentimental thoughts for our own values, freedoms and lifestyle. Girls and women should continue to feel safe in public spaces, be able to attend festivals, wear clothing appropriate to the weather and their own liking, travel on trains, go to the park, walk their dogs and live their lives. This is a wonderful Western achievement, and one that is worth defending.

Read the whole thing (and weep).

More on the way:

Endnote:  Whenever I see a story about Muslims working to destroy Vienna I think about how the Poles saved Europe on September 11th-12th, 1683 at the Gates of Vienna and it brings tears to my eyes. 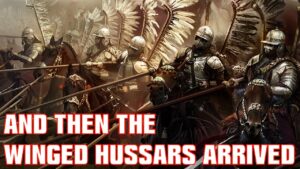 The siege of Vienna was remembered in Poland yesterday