We have written on this topic on many previous occasions.  The Rainbow Nation (South Africa) has been experiencing xenophobic and racist violence for years. 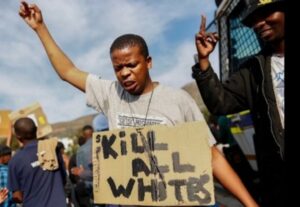 The most bloody violence has been directed at the landowners who farm the land (and incidentally feed the population)!

Readers should know that the US (so far) has not invited the persecuted farmers to America, but we do admit hundreds of ‘refugees’ a year from South Africa.

We resettle Somali and other Africans that South Africa rejects.  So much for the Rainbow Nation myth!

And, by the way, I haven’t heard any clamor from the US refugee industry/contractors to add South African whites to our refugee admissions for the coming year.  Why is that?  Could it be that it doesn’t fit the meme—only people of color are persecuted, never the other way around!  Think about it! Admitting such a thing would turn the whole UN upside down!

Can you imagine the day when European whites from Sweden, the UK or France beg for asylum in the US? I can.

A delegation of Boers recently travelled to the world’s largest country to consider taking their money and escaping from farm murders and expropriation.

The world’s largest country, Russia, which remains relatively underpopulated for its size, is reportedly considering welcoming thousands of white South African farmers into its borders to boost its agricultural industry.

A group of about 15 000 farmers have reportedly offered their services to the country, to go and farm in the south, while investing their savings in the country and offering English lessons as well.

According to a Russian news channel, the plan is for the first 30 families to first establish themselves before more follow.

“A delegation of Boers arrived in Stavropol with a proposal to open a migration channel,” reports the channel, Rossiya 1 TV.

Farmer Adi Siebus told the Russians they were now seeing the move as a matter of life and death owing to the ongoing killings on farms from criminal attacks and the fact that South African politicians have allegedly been stirring up hatred and a “wave of violence”.

South Africa is considering changing the constitution to make expropriation of land without compensation easier.

They said Stavropol has a great climate for farming and each family is said to be willing to bring at least R1.4 million ($100,000) with them to lease land in Russia and kick-start their farming efforts.

Russia’s humanitarian absorption of migrant refugees is being weighed after a series of murders the South African government has been accused of encouraging, and that have made farming in South Africa the most deadly occupation in the world.