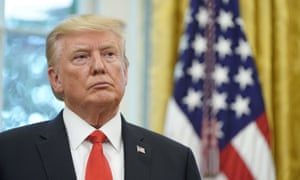 The primary reason given for the lower than normal number is that there exists a massive backlog of asylum claims for those who are already in the country and are insisting they are refugees too!

Suffice it to say the wailing in the refugee industry has begun!

Their PR machines have been working overtime for 4 weeks in an attempt to get the President to change his mind on the 18,000 cap announced in the closing days of September.

Because refugees chosen by the UN and flown-in represent paying clients that keep the nine major contractors afloat.  Asylum seekers, may eventually seek the ‘services’ of the contractors, but there is no per head grant money coming with them (at least not yet!).

If the ‘humanitarians’ are looking for immigrants to love and help, there are plenty of asylum seekers they could help with their own private charitable donations, right—not to mention poor and vulnerable Americans!

The United Nations quickly put out a statement saying the UN High Commissioner for refugees is “troubled” by the final decision by the US government to admit ‘only’ 18,000 third world refugees over the next 11 months.

And, the first contractor out of the box, Church World Service, says this:

New York City–Last night President Trump signed his discriminatory and cruel Fiscal Year 2020 refugee admissions goal that will cap admissions at 18,000 and limit arrivals based on category and country of origin. The signing of the presidential determination will now end the unprecedented moratorium on refugee arrivals that has blocked refugees from arriving in the United States since October 1st of this year.

“President Trump has ripped our country’s welcome mat out from under the most at-risk refugees in the world, people we have pledged to protect. The dire consequences of this refugee ban will last for years if not decades to come as the refugee resettlement program is dismantled and our nation’s legacy of compassion and welcome is finally snuffed out.

Families who have waited years to be reunited have little hope of ever being together again. Refugee communities within the U.S. will lose their support systems as the infrastructure in place to support them disappears.

“While we are thankful that some refugees who have had their cases put on hold while we awaited this policy to be signed will now be able to arrive, the number of people who will find protection is tragically low and simply unacceptable. Thousands of lives are at stake. People of faith across the nation implore Congress to step in and block the destruction of the life-saving refugee resettlement program, and restore it to historic norms before it is too late.”

Thanks to a reader for sending me the State Department’s press announcement yesterday!

President Trump signed the Presidential Determination on Refugee Admissions for Fiscal Year 2020, following consultations with Congress conducted by the State Department, along with the Department of Homeland Security and the Department of Health and Human Services. Our Departments will work closely to implement the President’s program, which provides for the resettlement of up to 18,000 refugees in the United States this fiscal year.

America’s support for refugees and other displaced people extends well beyond our immigration system. It includes diplomatic efforts around the world to find solutions to crises, like our support for the legitimate government in Venezuela against Maduro’s tyranny. Addressing the core problems that drive refugees away from their homes helps more people more rapidly than resettling them in the United States.

Keep refugees close to home until they can return and rebuild their countries!

Our support for displaced people also takes the form humanitarian assistance, and in Fiscal Year 2019 the United States contributed nearly $9.3 billion to supporting crisis response globally, the largest contribution of any country in the world.Helping displaced people as close to their homes as possible better facilitates their eventual safe and voluntary return. Their efforts to rebuild their communities help restore affected areas to stability, which is always in America’s interest.

Indeed, the security and humanitarian crisis along our southern border has contributed to a burden on our immigration system that must be alleviated before we can again resettle large numbers of refugees. Therefore, prioritizing the cases of those already in our country is simply a matter of common sense.The diplomatic agreements the United States has reached with our Western Hemisphere neighbors to address illegal immigration and border security will allow us to refocus resources on reducing the current backlog of asylum cases that now encompasses more than an estimated one million individuals.

One thing that never made sense to me is the fact that supposedly the contractors are so worried about saving refugees and yet are at the border egging-on more economic migrants to come in illegally.

If your concern is truly for refugees and their well-being, it makes no sense that one would support importing competition for refugee admissions.  But it makes all the sense in the world if your goal is to change America by changing the people and that begins with hauling in more future Democrat voters.

One of the most useful documents available on the program each year is the report to Congress that accompanies the Presidential Determination.  For serious students of the US Refugee Admissions Program it is worth reading and saving.

I admit I haven’t read it all yet, but will!  Here are a couple of charts that jumped out at me.  They support the President’s assertion that asylum claims are swamping the system (many will turn out to be illegitimate).

(For newbies, asylum seekers get here on their own and say they will be persecuted if returned to their home country. They go through one of two legal processes and if determined to have a legitimate claim to refugee status they are given all the welfare goodies and services that refugees flown-in receive.)

Incredible!  Look at the column on asylum grants! 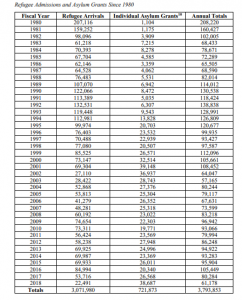 And, then below see the charts on the backlog in the two systems available for migrants to claim asylum (to say they are refugees).  Many of these migrants came across our southern border, applied for asylum and disappeared! 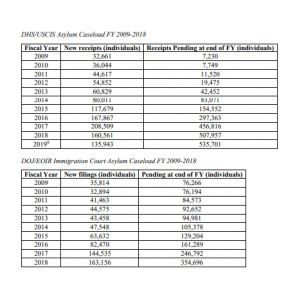 Again, the report is here.

So what happened to considering the views of citizens when placing refugees?

I see no reference in either the statement from the White House on Friday or from Secretary Pompeo about local communities and state governments having any say in the placement of refugees as the President had announced on September 26th, see here.

Did they already give up that idea?