Editor:  This is a guest post by David James who recently explained how the Trump Executive Order will not do what we had all hoped.

Knoxville City Council has voted unanimously to beg Republican Governor Bill Lee for cheap refugee labor and directed their open borders mayor Madeline Rogero, “to send a letter to the U.S. secretary of state to share the city’s plans to participate “’in this very worthy program.”’

Governor Lee would be well advised to not go down the “compassionate conservative” route, remember who put him in office, and carefully study the issues raised in the Tennessee lawsuit.

He should pay particular attention to the long-arm reach the federal government has made into his state budget to pay for the federal resettlement program.

Federal reports have admitted to shifting costs associated with the refugee resettlement program to state and local governments.

Of course these urban lefties see no irony in the fact that the director of the federal contractor who heads up Bridge Refugee Services, was a refugee herself and now gets paid by taxpayers to bring refugees to Knoxville and Chattanooga.

Bridge Refugee Service*** contracts with national VOLAGs Church World Service and Episcopal Migration Ministries and like all contractors involved in the resettlement industry, relies on federal cash flow to keep their pipeline flush. [Church World Service recently joined forces with CAIR to demand that the White House admit more refugees to the US.—ed]

Bridge’s financial reporting has been spotty, but what is available shows what they are really worried about – contractors are paid for each individual refugee they drop into your community – so the fewer the number, the lower the federal payouts. The combined federal and state grants in 2017 and 2018 likely reflect a much lower federal contribution resulting from Trump’s annual lowered refugee arrivals.

The state grants likely refer to money funneled from USHHS to NGO Catholic Charities of TN (CCTN), which USORR designated to replace the state of TN after TN withdrew from the refugee program. Best guess is that CCTN has decided to help keep Bridge afloat knowing that both Knoxville and Chattanooga are true blue cities where open borders groups rule and local governments agree.

The reports also show that on average, 50% of the new arrivals are under age 18 – meaning all state taxpayers are paying for their English learner services in school.

You’ll also be heartened to know that Bridge works to make sure that their clients don’t become like backward, hateful, prejudiced conservative Republicans in Tennessee.

Bridge collaborates with an Adventist Muslim Friendship Association which helps arriving Muslim refugees (like Whahab and Jinan profiled in the 2018 report), “overcome differences in language, faith, and culture as well as the prejudice in the community. ‘“We learned you don’t have to change yourself to be like Americans or change Americans to be like you,” says Jinan.”

Wahab has already joined Bridge’s board and no doubt it won’t take long for him to connect with the TN American Muslim Advisory Council which is doing its level best to force its desired change on Tennessee communities.

CCTN well understands that refugee resettlement MONEY is the lifeblood of not only Bridge, but its own organization as well. Take a look at their latest available financials – almost 50% of its operating budget for the entire organization is based on money flow from refugee resettlement program. At the same time, they have drastically reduced services to needy American citizens. 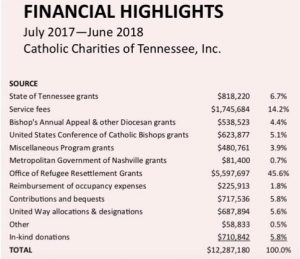 That’s the pattern with the open borders, moralizing lefties – needy and worthy American citizens – people with intellectual disabilities, the homeless, and veterans, step aside.

***Editor endnote:  Interesting that Bridge first came to the attention of RRW in 2007 when we first learned that it refused to give information to the FBI about two Iraqi refugees it had resettled. In 2003, Bridge joined the ACLU and Muslim groups to sue the federal government to block the use of the post 911 Patriot Act.

This story gave me a good laugh!

Okay, we agree! All of the tens of thousands of supposed ‘refugees’ who flowed north claiming they fear our President have permission to stay in the safer country—Canada.

In fact, Canada is now especially safe as it has re-elected Mr. Welcome himself, Justin Trudeau, for another four year term as prime minister.

(Reminder: An asylum seeker is not yet a refugee and the words should not be used interchangeably.)

TORONTO (Reuters) – The United States is unsafe for would-be refugees and a Canada-U.S. agreement that compels asylum seekers to first apply for U.S. sanctuary ought to be ripped up, lawyers for refugees and rights groups argued in a Canadian federal court on Monday.

Under the Safe Third Country Agreement, asylum seekers at a formal Canada-U.S. border crossing traveling in either direction are turned back and told to apply for asylum in the country they first arrived in.

Lawyers for unnamed refugees who had been turned away are challenging the agreement, saying the United States does not qualify as a “safe” country under President Donald Trump. Human rights groups, including Amnesty International and the Canadian Council for Refugees, have also joined the case, which could change the way the two countries cooperate on refugee issues.

More than 50,000 people have illegally crossed the Canada-U.S. border to file refugee claims over the past three years, walking over ditches and on empty roads along the world’s longest undefended border. Some asylum seekers have told Reuters they might have stayed in the United States had it not been for Trump’s immigration rhetoric and policies.

On Monday, the plaintiff’s lawyers said Canada had failed to adequately review the United States’ status as a safe country.

Refugee lawyer Andrew Brouwer cited examples of asylum seekers being returned to the United States and subject to incarceration and solitary confinement for weeks, with little access to counsel.