As you know by now the President’s cap for refugee admissions for FY2020 is 18,000 and you also should know that none arrived in October (the first month of the fiscal year) because President Trump had waited a month to sign the order.

Well, here they come!  Who are they? And where did they go?

The International Organization for Migration (IOM), a branch of the United Nations that takes care of doling out the plane tickets American taxpayers pay for, is reporting 600 in the first wave.

Washington DC – More than 600 refugees landed in the United States this week, marking the first arrivals of US fiscal year 2020. The International Organization for Migration (IOM) welcomed the refugees who come from a variety of countries.

IOM works closely with the US Department of State’s Bureau of Population, Refugees and Migration to provide case processing support, pre-departure health assessments and cultural orientation, as well as transportation support for refugees.

A group of 25 Congolese refugees were the first to arrive on Tuesday morning at Washington Dulles International Airport before continuing to their final destinations. Due to ongoing violence, the families fled to neighbouring Rwanda where they remained in limbo for years. [And, remind me why this is our problem!—-ed]

Almost half of the refugees resettled in the US in fiscal year 2019 were from the Democratic Republic of the Congo. Several others arriving this week are also Congolese.

What is so maddening about the Congolese wholesale movement to America is that Obama told the UN in 2013 that we would take 50,000 over five years and we are now almost at 60,000 and they are still coming.

I bet the deep staters at the US State Department never told the Trump people there was supposed to be a limit on the Congolese!

So it is no surprise that when I checked the data at the Refugee Processing Center I see that 226 of the 563 refugees admitted in the last week are DR Congolese!

I suspect the discrepancy in the numbers reported by IOM and the RPC is that IOM has shipped off 600 (maybe), but the State Dept. data base isn’t up to the minute and shows that we admitted 563 refugees from the first of November to today.

Because I don’t plan to report every month about who came and where they went, I’m going to give you a tutorial on finding out yourself! 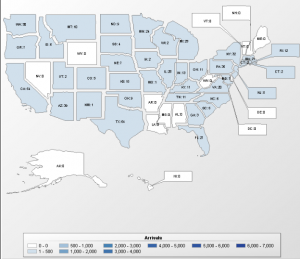 When choosing parameters for the ‘arrivals by destination’ search, choose ‘fiscal year’ and ‘destination.’  Just for fun I did Minnesota.  Here are the ‘new Minnesotans’ that arrived this week. 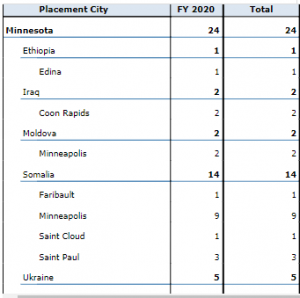 Here is what I did learn for the whole batch this week:

Plus smaller numbers from many other countries.

Of the 563, 154 (27%) belong to one or another Muslim sect. I was surprised to learn that a small number of the DR Congolese are Muslims.  There is no Muslim ban!

Now you too can do this yourself and I recommend that you do it at least monthly and see who is coming to a town near you!

(Have fun, play around with it!)

For serious students of the refugee program, this post is filed in two categories here at RRW: ‘Where to find information’ and ‘Refugee statistics’. All categories are in a drop-down on the right hand side bar at RRW, here.